A New Mexico Escort Speaks Out About the Albuquerque Busts - Ms. Magazine
Skip to content 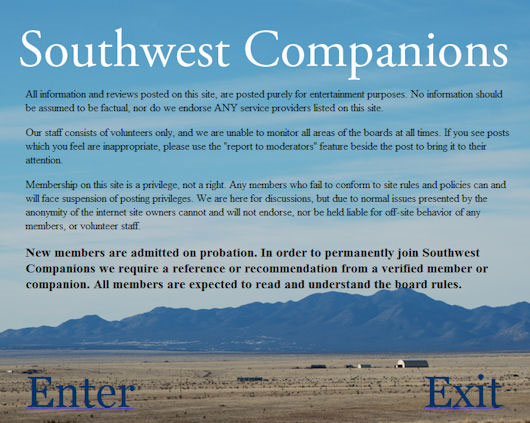 Jennifer is an escort working in New Mexico. She graciously agreed to be interviewed about the recent prostitution bust in Albuquerque [Editors’ note: which Ms. Blogger Laura Paskus covered here]. The David Flory she refers to is the man accused of running the Southwest Companions (SWC) website and other charges.

How did you find out about the Albuquerque bust?

Texts and messages started flooding in immediately. Everyone who heard contacted me pretty quick.

How has your escort business been affected?

It has been devastated and I guess that was their goal. The business completely died immediately after the story broke. Only a very few longtime clients are still in contact right now, and half of them weren’t associated with SWC at all.

What’s the vibe in the escort community right now?

I know very little because I haven’t had much communication with anyone. I have no idea who I can trust and who I can’t so I’ve been very cautious. One of my friends took down her website like I did. Another one that I know of at least changed her phone number, although I have no idea how that would help.

How have the clients been reacting to the bust?

Well, the ones I have spoken with have looked for reassurances that they’re still safe with me and are pretty saddened by the loss of the New Mexico community as a whole. No one understands why resources are being wasted like this on our industry, which we view as a “victimless crime” when there is so much serious crime out there that involves violence and theft and destruction.

How does this bust affect escorts communicating with each other and with clients?

Well as I’ve said, there is very little communication now, which creates a very dangerous environment for all of us. This “prostitution ring” was really a website designed for open communication and safety, and of course a little free advertising. It was the place we could discuss clients and verify with each other who was honest and good and who was freaky, violent or a rip off artist. The same goes for the men. They knew which girls were not only talented, but also who was drugged out or known to be a thief. We could discuss who played unsafely and who had good reputations for practicing safe sex. All that is gone now, and we’re all back to playing blind, so to speak.

How will these arrests affect safety practices amongst escorts?

When we see sad circumstances of young girls being pimped and controlled and mistreated, and then even more horrific stories like the West Mesa Murders, it creates a feeling that “something should be done”. The saddest part is that Southwest Companions was created exactly for that purpose and now it’s gone. They’ve destroyed the community of safety we built to enable us to work independently.

I would beg women to just hang on through this tough time, work to build back trust among us, and continue to communicate with each other. Don’t turn to the streets or the truck stops or to pimps for protection. Don’t let feelings of desperation or despair make you reckless. Stay strong, stay clean, stay smart.

What are your opinions of the media coverage?

Well it was definitely the hot button story for a few days. The writing was pretty skewed in the direction of making David seem evil.  It was easy for me to see that not much is known about how our industry really works.

Several women were accused of being prostitutes in the media before being found guilty of it. Have you heard how these women have been affected?

Well, I have to defend the media on this one. The women that they accused of being prostitutes had full web sites claiming to be talented escorts, containing pictures and detailed descriptions of what they would do and how they would pleasure someone during a date and had their hourly rates posted. It’s pretty hard at that point to quibble over who might be a what.

The Dateline special portrayed the ABQ police as wanting to help New Mexico prostitutes (ex the West Mesa Murders) and yet the police are busting women and men in the ABQ area. Do you think this bust will negatively affect future progress on the case?

Omg, I can’t even imagine! I’m afraid of more escorts moving to the streets after losing their main Internet business. I know that by destroying trust and communication avenues, the only willing participants with police are going to be girls who are being threatened by the police because of their minor children or drugs. How reliable will those be? By arresting the decent paying clients, it’s only going to create a desperation that may drive girls to be more reckless with which Johns they go with, leaving them wide open to freaks and killers.

What actions would you like to see the sex worker activist community doing about this bust?

I’m not sure what can be done. We need to rebuild a forum for referencing safe people, places and practices.

What can sex worker supporters do to help escorts?

It mainly depends on voting for the right people and ideas, especially on local levels. We need to put pressure on our governments to put the money and resources into the projects that are really important.

Prostitution busts are often portrayed as necessary to get women out of the escort business. Do you think women quit the business and get “socially accepted” jobs because of busts like this?

I don’t know. Two women I know well already have regular jobs and I think that’s really common. One is a teacher who is divorced with two children; she got into the business when she was facing foreclosure on her house. The other has been working a job, going to school and still works in the business to stay afloat. I’m disabled and unable to work a normal job. I’m in the business so I can afford my doctors and medications. My medications alone run about $1,200.00 a month. I’ve been on the waiting list for state medical care for over 3 years now.

What are your opinions on governments and societies telling consenting adults what they can and can’t do with their time, bodies and money?

Oh I could go on forever about how wrong the system is. I think most of the ridiculous laws were brought about through good intentions of creating an environment of protection for it’s citizens but hundreds of years worth of history has proven that it doesn’t work. People are not better people because they live under thick layers of blanket laws that don’t take individual circumstances into account.

I’d like to give my personal opinion on David Flory, as someone who knew him and worked with him. Although we, the local working girls of New Mexico, would get frustrated with him for encouraging so many outside girls to travel to New Mexico for work, he wasn’t a bad guy. He took over the site to keep it from getting lost and falling apart. He recognized the need for service that the site provided and he was dedicated to keeping the hobby fun and safe for everybody. He never pressured or forced or intimidated or threatened or “pimped” or “managed” anyone. His biggest error was trying to encourage out-of-state girls to visit. In his mind, and the minds of the other men that were arrested, it was about increasing the variety of girls to choose from.

Reprinted with permission from RadicalVixen.com.

Radical Vixen is a sex worker, hippie, activist and blogger. An avid knitter, she dreams of one day raising llamas to spin their fleece into yarn. When not traveling, her and her husband live in the southwest surfing the web off solar power. She blogs about politics and sex work at RadicalVixen.com

Midterms and ‘Mid-Cycle Spotting’: Getting Real About Women’s Health
Federal Funding Is Necessary to Sustain Election Workers
Our Abortion Stories: ‘You Aren’t Thinking of Having It, Are You?’ Were His First Words