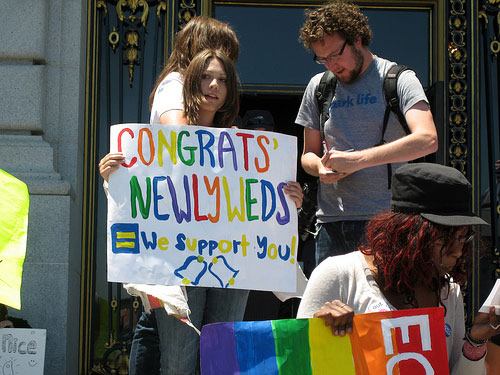 The past 24 hours have been exciting ones for supporters of gay marriage rights. If the President and progressive members of the Senate get their way, the Defense of Marriage Act (DOMA) is on its way out.

At a press conference yesterday, White House press secretary Jay Carney released word that President Obama supports the pending Respect for Marriage Act [PDF], which would repeal the federal gay marriage ban and recognize same-sex marriages in states where they are legal. Last night, the president’s unqualified endorsement of a DOMA repeal went up on the official government site:

President Obama is proud to support the Respect for Marriage Act, which which has been introduced by Senator Dianne Feinstein and Congressman Jerrold Nadler. This legislation would uphold the principle that the federal government should not deny gay and lesbian couples the same rights and legal protections as straight couples.

The President has long called for a legislative repeal of the so-called Defense of Marriage Act (DOMA), which continues to have a real impact on the lives of real people–our families, friends and neighbors.

The President’s use of the disparaging phrase “so-called” to describe DOMA takes a linguistic stand against everything DOMA implies: that lesbians and gay men are second-class citizens. It also cleverly re-purposes a phrase often used to cast aspersion on legally sanctioned same-sex marriages.

Today, a two-hour Senate Judiciary Committee hearing sought to assess DOMA’s effect on American families. Legally married same-sex couples testified about the discrimination they have faced at the hands of the federal government. Susan Murray, a resident of Vermont, told of how she and her wife pay higher federal taxes because of DOMA, to the tune of $6,000 a year. Andrew Sorbo, of Connecticut, recounted losing his husband of 30 years to pancreatic cancer and, after having to pay higher costs for insurance because of DOMA, being unable to inherit his husband’s Social Security benefits.

Their stories represent those of the thousands of U.S. couples who have marriage rights in their home state but no status in the eyes of the nation. Now that New York has legalized same-sex marriage–and once Don’t Ask, Don’t Tell is finally repealed–there will be even more of them. (However, the witnesses called weren’t fully representative of gay people in the U.S. Out of the ten witnesses, there was only one woman. And, as gay-rights activist and Iraq war veteran Dan Choi wrote in a statement of protest, there was a lack of racial and ethnic diversity among those testifying.)

So should we expect a repeal of DOMA? The LA Times reports that the Respect for Marriage Act faces “long odds,” noting that “With 27 co-sponsors, Feinstein has just fewer than half the votes for a filibuster-proof majority.”

But the Senate Judiciary hearing and Obama’s support lend clout to the bill. In the wake of the legal brief filed by the Department of Justice earlier this month and Obama’s approval of the repeal of Don’t Ask, Don’t Tell, the President is giving proof to his claim of being a “fierce advocate for equality of gay and lesbian Americans.” Given that the most recent Gallup poll on marriage equality found that for the first time in its history of polling on the issue, a clear majority–53 percent–of Americans support full marriage recognition for same-sex couples, Obama may counting on popular opinion to back him up.

And Senator Dianne Feinstein (D-Calif.), who introduced the bill, has made clear she’s in it for the long haul. In her opening statement at the hearing, she said:

Today is an historic day, the first congressional hearing ever on the repeal of the Defense of Marriage Act. DOMA was wrong in 1996 and it is wrong today.

For some reason, the Congress of the United States, when it passed DOMA in 1996, sought to deny rights and benefits provided by the federal government to legally married same-sex couples.

And that is what today is about. However long it takes, we will achieve it.

You can voice your support by signing this Change.org petition: