Michelle Obama's Milkshake and Other Non-Stories About Women - Ms. Magazine
Skip to content 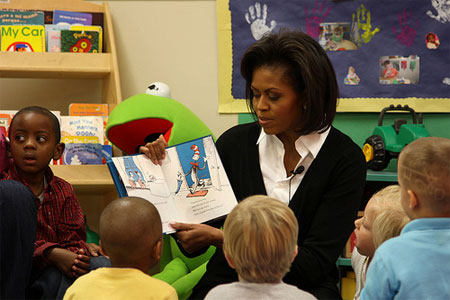 Want to know how women politicians accessorize? How many calories they consume? Us neither. And yet that’s exactly the kind of hard-hitting journalism we’ve been seeing from major news outlets this month.

A Washington Post journalist on the scene confirmed the first lady, who’s made a cause out of child nutrition, ordered a ShackBurger, fries, chocolate shake and a Diet Coke…

Because women who support keeping kids active and serving actual food in our school cafeteria’s should never, as a matter of principle, enjoy the occasional milkshake. But just in case there was any cry of journalistic malfeasance here, the dutiful reporter adhered to reportorial standards:

Update: We made a mistake in our original calculations. The calorie-count for the first lady’s order was actually 1,700, not the 1,556 we originally reported. Our apologies.

Unfortunately, Jennings’ article was just one of a slew of really irrelevant stories about prominent women.

In “Rebekah Brooks Distracting ‘Do,” The Daily Beast last Wednesday criticized former News Corps CEO Rebekah Brooks for her “wild mane of wavy auburn hair.” Writer Robin Givhan claims Brooks’ unruly hair may have sent the wrong message to juries. (Read feminist critiques of the piece at Jezebel and Slate). Givhan spends over 800 words speculating about just what kind of message Brooks was trying to send with such a bold hairstyle:

One could argue that it’s to Brooks’ credit that she refrained from dramatically altering her signature look. … Her appearance suggested she was ultimately more concerned with catering to her ego than in convincing anyone of her innocence.

One option Givhan fails to consider is that perhaps Brooks wasn’t trying to send a message. Perhaps she was more concerned with being questioned before parliament over the biggest media scandal in recent history than with what to do with her hair that morning.

While we might expect celebrity stalker blogs to update us on what Hillary Clinton’s been eating, it’s upsetting that media outlets as big as the Post or the Beast are giving us similarly useless non-news. Especially when it is women who get media coverage of what they eat and wear, rather than they’re actually doing.

Ms. readers–what other ridiculous non-stories about women have you seen?

Photo from Flickr user The U.S. Army under Creative Commons 2.0

Hillary Clinton on Iran, Abortion and the 2022 Midterms