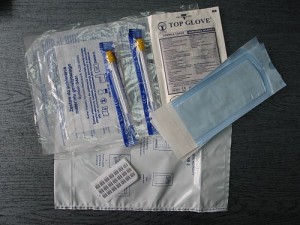 It was an ordinary day in October, 2002. Julie Weil and her infant son were picking up Julie’s daughter, three-year-old Emily, from her Florida preschool at  noon. As Julie buckled her daughter into her car seat, she felt a sudden blow to the head.

That day, Julie was raped four times in front of her children.

After the initial blow, Julie’s attacker hijacked her minivan and took the family to a hidden, far-away place near the Everglades. There, he ordered Julie to disrobe, threatened her three-year-old daughter and forced both of her kids to watch as their mother was savagely assaulted.

Julie wasn’t the first woman this man had raped, nor, perhaps, the last. To help police catch him, she endured a two hour, head-to-toe forensic exam immediately after the assault. Because the rapist had ejaculated in Julie’s mouth, the exam only turned up  a speck of DNA on the T-shirt she had worn, which matched the DNA profile taken from another rape victim. Police knew they were looking for a serial rapist, but they didn’t yet have a suspect.

Months later, Julie got a call from police: They had a DNA match. Her rapist had been arrested after beating his pregnant girlfriend at a hotel, and the swab from his mouth matched the DNA collected from Julie’s T-shirt. That phone call marked the beginning of a long road to closure.

I spoke to Julie about about her experience for my piece in the new issue of Ms., “How to Stop a Serial Rapist.” Here, she opens up about what it’s like to undergo a forensic exam and a rape trial, and, at long last, to see a conviction.

Ms. Blog: Tell me about the forensic exam.

Julie Weil: Getting there is half the battle. First, there’s all the anxiety of getting into a car with a stranger–in my case a police officer. [When you get there], you’re forced to disrobe and they impound all your clothes; they took my shoes, my bra, underwear, top, pants. You put on a hospital gown and get in stirrups like you were going to the gynecologist, and for hours they comb your body looking for errant hairs. They take a blue light and shine it over all the surfaces of your body looking for DNA–semen, saliva. They do very thorough internal exams, and they photograph everything that they’re doing. It is people probing you, trying to help you in retrieving evidence, but in order to do that they have to go to the most intimate areas of your body, in essence your soul.

How long was the exam?

With the photographing, the scraping, the probing, you’re in stirrups or in the gown for about two hours, at least. I think that’s part of the reason that I’m fighting so hard to get this DNA backlog legislation [the SAFER Act] passed in Washington, because it’s such a personal experience to get those items in [the rape kit]–those samples, those tests–that you feel like a piece of you is sitting in that box on the shelf in the police station that nobody’s testing.

What do you know about the man who raped you?

He was a serial rapist, he had abducted three sets of women and children before me and before he moved on to stranger violence he was a date-rapist and spousal abuser. All along the way he had shown these patterns of behavior and he was never stopped. People who have the predilection to do these kinds of crimes aren’t going to stop until they’re caught. I just encourage people that, as horrible as rape-kit exams are, they’re so necessary. Without them we can’t get these guys off the street.

What did the nurses find during the exam?

It was horrible. On me, after that very long period of time, they found nothing. But it was kind of unique in that I was forced to swallow the ejaculate all four times, and he knew that going into it. He knew that he was getting rid of the evidence that way. Once the DNA gets into your stomach it’s long gone, there’s no way they can retrieve it, and so they didn’t find any DNA on my body. He had shaved himself so there was no hair or hair residue.

Can you tell me about the trial process?

It took four years, from the time he was arrested to the time we went to trial. It was a continuous frustration. He changed attorneys six times, and every time that was another delay. Witnesses move out of town, and it’s hard to get the person who ran the DNA because now they’ve moved to another lab, out of state. Every time there’s a delay that’s one day further away you are from closure. When you make it to then end of the process, no matter how long it is, and you secure a conviction, oh my gosh, I think that’s the biggest achievement of my life.

What role did the DNA play in the conviction?

It played a huge role. That’s the thing with DNA–even in a date-rape case when you know who the person was, you always have to have DNA, because that’s what everybody hangs their hat on now. Even though it seemed like this was a cut and dried case–because what woman would consent to being raped in front of her children in the middle of the day?–[the defense] still took that [consent] angle.

The only cross-examination they really did in the case was against the DNA expert, because I think that any jury who hears confirmed DNA evidence and [the experts] say it’s a 1 in 6 billion chance it could be anybody but this guy, that’s so compelling.

Where is the case now?

Everything is over. The appellate process is over. He has seven consecutive life sentences plus 15 years. And that’s just for what he did to my family. As a victim, it’s nice to have a judge who didn’t lump all four rapes [committed against me that day] into one life sentence, because each time he raped me was a [separate] torturous offense. And he got a separate life sentence for kidnapping my son, kidnapping my daughter and kidnapping me.

That kind of recognition from the legal system, even though it seems petty (because obviously he can only serve one life sentence), is recognition that what he did warrants life sentences seven times over. Just in some symbolic way it makes you feel like you can get some closure.

To read more of Julie’s story and learn why testing rape kits can stop serial rapists, join the Ms. community or pick up the new issue, on newsstands now.

If you identify with Julie’s story as a victim of sexual assault, don’t hesitate to contact the Rape, Abuse and Incest National Network (RAINN) hotline at 1.800.656.HOPE(4673) or online at www.rainn.org.