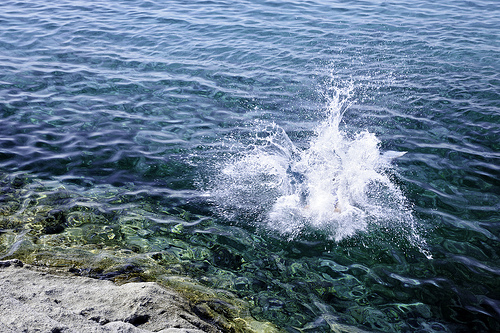 Imagine swimming 103 miles nonstop and without sleep through territory inhabited by four kinds of sharks.

You can’t. But Diana Nyad can. And after a year-and-a-half of planning, she’s on her way from Havana to Key West–a big, splashy voyage she couldn’t quite finish when she attempted it at age 28, so she’s trying again at age 61.

We heart Nyad for lots of reasons. Anyone who can do such amazing feats of physical bravado can’t help but set our hearts racing. Anyone who’s got the nerve to do it in her 60s gets bonus points for guts and gusto. And anyone who allows herself to be photographed in a bathing suit at that age … well, that’s the bravest part of the whole adventure in the minds of us 60-somethings. Just kidding. (Sort of.)

Kidding aside, Nyad’s been an inspiration for decades now–first for her swimming feats (she may not have finished her 1978 Cuba-to-Florida swim, but the next year she swam 102 miles from Bimini Island in the Bahamas to Juno Beach, Fla), then for her enthusiasm as a broadcaster, women’s sports booster and motivational speaker. It’s not enough that she motivates herself to complete impossible tasks: She wants to serve as an example to others. Not that she expects any but the rare few to attempt such marathon swims; rather, she wants to model the notion that we can surprise ourselves by how much we can accomplish if we really set our minds and bodies to the task.

So when we say, “You go, girl!” to Nyad, we’re also saying it to ourselves.

And we’re hoping that she stays safe, stays strong, and makes it all the way to Key West!!

UPDATE: Nyad decided to end her swim halfway through, after 29 hours of stroking. The winds were strong, the current was pushing her off-course, and that situation wasn’t helped by the excruciating shoulder pain and draining bouts of asthma she was experiencing. We salute you, Di Ny–you shot the moon and “only” reached the stars.