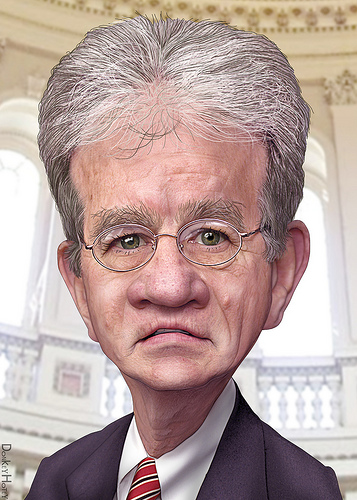 The debt-ceiling debate has done little good for the U.S. Congress’ reputation in the eyes of Americans (or the world), but there’s one senator for whom it was political manna from heaven: Oklahoma Republican Tom Coburn.

The arch-conservative’s return to bipartisan debt-negotiation group the Gang of Six prompted a media lovefest: “Mr. Coburn has many admirers,” wrote The New York Times in a glowing profile. Newsweek called him “the man of the hour.”

It seems the mainstream media has a short memory. The hoopla over Coburn’s return wiped clean any speculation about why he’d departed the Gang back in May.

While Coburn said he left because of ideological differences, many noted the timing: He quit the Gang the same week a damning report was released by the Senate Ethics Committee on Sen. John Ensign’s sexual harassment scandal—a report in which Coburn’s name came up not one, not two, but 46 times.

Ensign resigned from the Senate the day before he was going to testify under oath about the scandal. The ethics report, released a week later, detailed “substantial credible evidence” that Ensign had violated federal criminal and civil laws in the course of an unwanted sexual relationship with his staffer—by lying to federal investigators about illegal payments to the woman and her husband (who also worked for him) and setting the husband up as a lobbyist (breaking the one-year post-employment lobbying ban). It also found “substantial credible evidence” that Ensign’s behavior constituted sexual harassment.

U.S. Sen. Tom Coburn (R-Okla.) walks off the floor after the Senate failed to pass legislation approved last month by the House that would cut $57 billion from the federal budget.

So where does Coburn come into all of this? The report made frequent and significant references to Coburn’s role as a go-between with the woman’s husband, and raises many questions regarding whether Coburn, too, violated Senate rules and federal law. Did Coburn contact Ensign’s father, who made illegal payments to both the woman and her husband? Did Coburn conspire to violate Senate “revolving-door” laws by allowing the woman’s husband to lobby him just weeks after leaving Ensign’s employment?

The D.C. watchdog group Citizens for Responsibility and Ethics in Washington (CREW) has called on the Ethics Committee to investigate possible violations of federal law by Coburn in allegedly covering up the Ensign scandal. Ms. magazine and the Feminist Majority Foundation are joining voices with CREW to urge such an investigation.

The public deserves to know whether Coburn—a sitting senator—broke the law. We also deserve to know whether he received immunity from prosecution for cooperating with the Ethics Committee‘s investigation.

Also appeared on The Daily Beast.