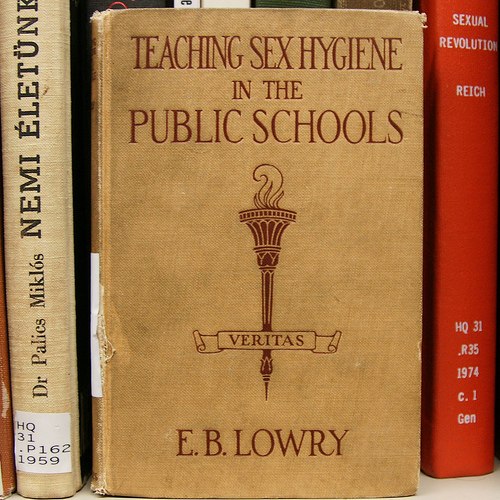 You have to hand it to New York City for doing the right thing(s) for sexual health and rights lately.

First, the city passed a law mandating that crisis pregnancy centers, which use misinformation and ideology to misdirect women trying to make a life-changing decision, disclose whether or not they have medical staff and/or offer birth control and abortion care services. This law was subsequently and unfortunately blocked in court through a preliminary injunction a court and its fate remains unknown.

Now, the administration of Mayor Michael Bloomberg has mandated that New York City Public Schools teach comprehensive sex education, requiring that students in middle and high schools take sex-ed classes beginning this school year. According to The New York Times, the classes will include explicit information on how to use condoms and other information on safer sex. The city’s mandate is broader than current state regulations requiring that middle and high school students take one semester of health education classes in that it requires a semester of sex education in 6th or 7th grade, and again in 9th or 10th grade, and also suggests use of the recommended programs HealthSmart and Reducing the Risk. A city survey of principals last year found that 64 percent of middle schools were using the HealthSmart curriculum, notes The Times.

The new classes, which will be coeducational, could be incorporated into existing health education classes, so principals will not have to scramble to find additional instructional time. The classes would include a mix of lectures, perhaps using statistics to show that while middle school students might brag about having sex, not many of them actually do; group discussions about, for example, why teenagers are often resistant to condoms; and role-playing exercises that might include techniques to fend off unwanted advances.

“The new mandate is part of a broader strategy the Bloomberg administration announced last week to improve the lives of black and Latino teenagers,” report Fernanda Santos and Anna M. Phillips of The Times. “According to city statistics, those teenagers are far more likely than their white counterparts to have unplanned pregnancies and contract sexually transmitted diseases.”

“It’s obviously something that applies to all boys and all girls,” said Linda I. Gibbs, the deputy mayor for health and human services. “But when we look at the biggest disadvantages that kids in our city face, it is blacks and Latinos that are most affected by the consequences of early sexual behavior and unprotected sex.”

Citing a Guttmacher Institute report, The Times notes that between 2006 and 2008, 1 in 4 teenagers in the United States learned about abstinence without receiving any instruction in schools about contraceptive methods.

As of January, 20 states and the District of Columbia mandated sex and H.I.V. education in schools. An additional 12 states, New York included, required H.I.V. education only, according to a policy paper published by the institute.

At a time when it seems that the full force of political heat is directed at vilifying Latino and African American populations, the Bloomberg administration is taking other steps to support a diverse population of youth, by, for example, announcing a three-year, $130 million initiative to improve the lives of young minority men in the city.

And in a climate in which sexual health has become increasingly stigmatized, the city’s straightforward approach is both so refreshing and just-plain-common sense that it almost shouldn’t be news, but at the same time almost shocking. “Parents will be able to have their children opt out of the lessons on birth-control methods,” reports The Times.

City officials said that while there would be frank discussions with students as young as 11 on topics like anatomy, puberty, pregnancy and the risks of unprotected sex, the focus was to get students to wait until they were older to experiment. At the same time, knowing that many teenagers are sexually active, the administration wants to teach them about safe sex in the hopes of reducing pregnancy, disease and dropouts.

Health and rights advocates applauded the mandate as a victory.

“As longtime sex educators, we are pleased to see the city finally taking action on this important issue,”said Joan Malin, President and CEO of Planned Parenthood of New York City. “For far too long, too many of New York’s young people have been missing out on this vital information.”

“We are thrilled that the New York City Department of Education has taken an historic step in issuing a mandate for sex education,” said the statement of NARAL Pro-Choice New York.  “Beginning this fall, all public middle and high schools will be required to teach one semester each of sex education.”

In our 2010 report on the state of sex education in New York City public schools, interviews with parents, teachers, and—most importantly—students themselves revealed how sex education in New York City is inconsistent, with many schools failing to give students the information they need to prevent unintended pregnancies and STIs, make informed and healthy decisions, and keep themselves safe. Our years of experience working directly with New York City youth through our TORCH peer sexuality education program supports these findings: sexual health knowledge differs from school to school, and sometimes from classroom to classroom.

This mandate will standardize the loose patchwork approach that has allowed too many students to fall through the cracks for too long.

Some are already preparing for a backlash.

“We’re going to have to be the bridge between the chancellor’s requirements and the community,” said Casimiro Cibelli, principal of Middle School 142 in the Baychester section of the Bronx, where many of the students come from immigrant, religious families with traditional views on sex. “Hopefully, we’ll allay their concerns because of their trust in us.”

A 2009 survey by NARAL Pro-Choice New York found that 81 percent of city voters thought sex education should be taught in public schools. Despite the strenuous protests of the minority represented by anti-sex ed, anti-choice groups, that statistic mirrors support for comprehensive sex throughout the country.

Yet even while celebrating this victory, health educators expressed hope the city would go further.

“As groundbreaking as this mandate may be,” stated NARAL Pro-Choice New York, “it should be the beginning and not the end of the city’s efforts to provide students with the comprehensive, age-appropriate, medically-accurate sexuality education they need.”

“It includes the basics, such as hygiene and anatomy, as well as encouragement of parent-child communication, workshops on healthy relationships, and other vital information to keep our young people safe and healthy. The requirement to teach two years of sex education is a great first step, but the reality is that if we want to really protect our young people, we need to integrate good, effective, comprehensive, and age-appropriate sex education into every grade in every year of school.”