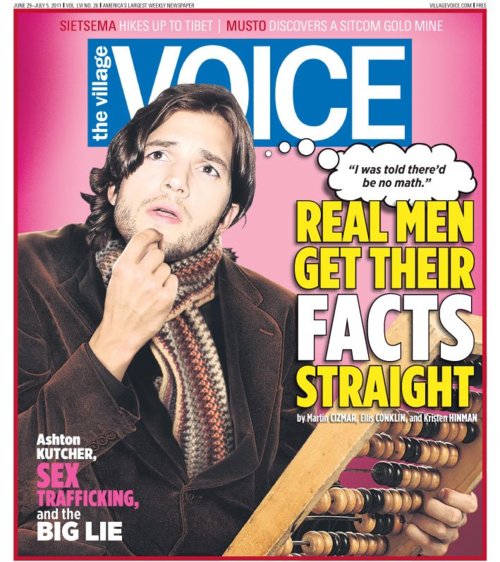 This summer, the Village Voice published an “investigative” series on the issue of sex trafficking in the United States. Framed as a hard-hitting exposé uncovering the truth, the series had a clear agenda: to disprove the existence of sex trafficking in the U.S. and discredit those who have criticized online sites that make it easy to buy and sell youth. But in its reporting, the Voice, ironically, engaged in the very behavior it’s accusing others of.

The entire thesis of the Voice article, and its excuse for a CNN-style interactive map, is that child-prostitution arrest data from various police departments throughout the country is a good gauge of the magnitude of child sex trafficking. (In a disclaimer at the bottom, the Voice notes this data is sometimes “incomplete,” in which case it refers to state and county statistics.) The Voice‘s choice to uphold police statistics as the gold standard for accuracy is perplexing given its investigative series “NYPD Tapes” last year, in which reporter Graham Rayman documented police downgrading and dismissing crimes in order to boost statistics, including reclassifying a rape case as “forcible touching.”

There are many reasons that numbers from arrest data do not accurately reflect the scope of the problem. First, prostitution is often considered a “victimless crime,” and thus fewer resources go toward addressing it. One sergeant on the West Coast told me that his unit referred to picking up girls on the street as a “trash run.” Second, youth in the commercial sex industry are frequently trained to lie about their age. While police may suspect that someone is a juvenile, processing her as an adult is far easier and therefore the path of least resistance. Third, many exploited youth are arrested on charges other than prostitution–things like weed possession and petty larceny–and thus don’t get counted as a prostitution arrest. Or, as is especially the case with girls, they are charged with status offenses such as running away. Finally, the glass-half-full view is that with a new emphasis on training and awareness so that first responders can better identify victims, arrests are beginning to drop. According to the Seattle PostGlobe, Seattle police recovered 77 minors in 2010 who were victims of commercial sexual exploitation, in contrast to the average of 19 arrests of minors per year reported on the Voice’s interactive map.

Given those commonsense factors that automatically skew police data, I was surprised to then read the following quote in the Voice piece:

“The Seattle Police Department totally have a handle on the situation and understand the problem,” says Melinda Giovengo, executive director of youth homeless shelter YouthCare. “That seems to be a very accurate count and is reflective of what the data shows.”

In any other story about any other issue in the Village Voice, a source that claimed that police were in “full control” would be framed as questionable at minimum. The newspaper has done multiple stories on cases of corruption and brutality within law enforcement. But in this piece, Giovengo’s quote is presented as fact, without any irony or skepticism.

There is a small but growing number of cops throughout the country who are working diligently on this issue, really understand the problem, and are sensitive to exploited youth. Even they would laugh at the idea that any police department. “totally has a handle on the situation.” The police who are truly committed to these victims talk about how challenging these cases are, how few victim services there are and how little support they receive from their superiors and fellow officers.

What also perplexed me was that a service provider such as Giovengo who works directly with these children could believe that these very low arrest numbers represent the full scope of the issue. And in fact, in a Seattle Times op-ed she published on June 5, Giovengo said otherwise:

As former U.S. Rep. Linda Smith indicated in a recent Seattle Times article … well more than 100,000 girls and boys are sexually exploited in this country each year. If you imagine that translates into small numbers here, don’t. Seattle bears the shameful distinction of having one of the highest rates of child prostitution in the nation. … A 2008 study estimated there were 300 to 500 prostituted youth in King County. … Meanwhile, Seattle estimates there are up to 1,000 homeless youth here every night. Judging from what we’re seeing at YouthCare and its peer organizations, this estimate needs to be raised.

Unless Giovengo had a significant change of opinion about the numbers of exploited children in Seattle in the weeks after her op-ed, it appears that either her quote for the Voice was taken out of context or she misheard the question. Regardless, while the Voice claims she agrees with its numbers, it would seem Giovengo actually supports in the very numbers the article is trying to disprove.

The crux of the Village Voice series is that numbers can be used to mislead people, especially when there’s financial gain involved. It’s almost comical then that the Voice would use unreliable, heavily spun statistics and quotes about child sex trafficking while running the for-profit classifieds site Backpage.com, which has long been accused of enabling such trafficking. What’s that saying about stones and glass houses?

Image of the Village Voice June 29th issue from villagevoicemedia.tumblr.com.