My Letter to Gloria Steinem - Ms. Magazine
Skip to content 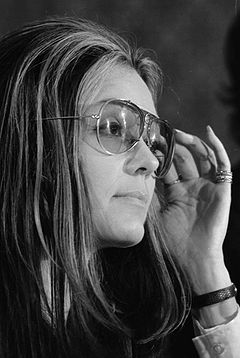 In 1970, having decided to become a feminist, I did the only thing I could think of to join the “movement”: I wrote a letter to Gloria Steinem.

She was on staff at New York Magazine then, and because my aunt and uncle had a subscription I often read her articles when I was at their house. Her writing fully engaged me, especially as she was naming that inchoate desire women were feeling for more in their lives. I didn’t need men to open doors. I wanted to play on school sports teams. I wanted to wear pants instead of dresses, flat shoes instead of uncomfortable heels. I didn’t want to believe there was anything I couldn’t do just because I was a woman. And I thought Gloria Steinem might give me some advice on how to put my newfound feminism into action.

I had seen some camouflage-dressed, combat-booted “women’s libbers” on TV. They looked angry, and I’m ashamed to admit that they sort of scared me. And then came Gloria. In the new documentary Gloria: In Her Own Words, which debuts on HBO August 15 at 9pm, Steinem mentions several times how her perceived attractiveness–think Diana Rigg on The Avengers–was something between a blessing and a curse. It drew people to her, and thus attention to the women’s movement, but also led some to be dismissive of her success even after decades of accomplishment. “The painful part,” she tells the camera during the in-depth interview with her that is interspersed throughout the hour-long film, “is [that] I work really hard, and the result is attributed to looks.”

I have to admit, though, that I first became a feminist because Gloria Steinem made feminism look appealing. She busted the false stereotype of “libbers” as shrill, unhappy harridans: We were long-haired college students (like me), suburban moms, professional women, even enlightened men! And some were glamorous journalists. I got it: Each and every woman could be a feminist as long as she believed in equity and justice and no limits to women’s aspirations.

The HBO documentary brings back those early days of The Movement in nostalgic archival clips of protests, marches and conventions. Moreover, it shows how a smart young woman from Toledo, born to a charming-but-irresponsible dad and a pioneering journalist mom (whose career was short-circuited by mental illness), managed to escape Ohio for New York City. She originally thought that tap dancing would be her ticket out of Toledo, but it turned out to be writing that gave her entree into a cool Manhattan life.

“I’m not sure what feminism was,” she says of those early days on magazine staffs, but she gradually found out. The low point of her life, she says, was writing about textured stockings. Sexual harassment was ever-present, but there was no word for it–“It was just called ‘life.'” Steinem identified with Holly Golightly from Breakfast at Tiffany’s, streaking her hair like Audrey Hepburn and taking to heart Hepburn’s/Golightly’s line, “I’ll never let anybody put me in a cage!”

Steinem’s most famous early assignment was going undercover as a Bunny at a Playboy Club, in a costume “so tight it would give a man a cleavage.” She ended up exposing not a glamorous world, but a tacky one that exploited and demeaned young women. Her final “click moment,” though, was when she covered hearings about legalizing abortions. She had had one herself in her early 20’s and never told anyone. But why–if one in three women had chosen to have abortions–was it such a secret?

Steinem says she became a public speaker because she couldn’t get the articles she wanted to write about feminism published. In 1971, she found a surefire way to get those articles in print: Start a feminist magazine.

The rest is the history of Ms., which will celebrate its remarkable 40 years of existence in 2012.

The film just touches on the early years of the magazine, with editors working shoulder-to-shoulder in tiny offices as they began to define feminism. It would have been nice to have seen more of the magazine’s development over time, but the documentary focuses more on Steinem’s personal changes in subsequent years. She faced nasty attacks from the media, exhausted herself traveling, had to sort out “this self-esteem stuff” (which led to her book Revolution From Within: A Book of Self-Esteem), and then, in a surprise to many, got married at age 66. Her husband David Bale took sick and died of brain lymphoma just a couple of years after they wed, but in the film she says she found a certain resolution even in that tragedy: She was able to care for David in a way she couldn’t do, as a girl and young woman, for her ill mother.

Steinem has always seemed to be a particularly caring person. And she taught me a lesson early on, long before I had the chance to become personally acquainted with her through my work as a freelancer and then an editor for Ms: She answered my letter. I had asked how I could get involved in the women’s liberation movement, and she directed me to a women’s history archives in Berkeley run by Laura X. That’s how relatively small the movement was in 1970–the only place in California she knew to recommend to me was nearly 400 miles from where I lived in Los Angeles. Still, she had typed up a letter herself, on New York Magazine note paper, and sent it to a fawning 20-year-old fan.

Every time I answer a young person who writes to Ms., I think about Gloria.

By the end of the film, everyone watching a screener in our Ms. offices was misty eyed. Especially when Steinem says at the conclusion, “I’ve so loved being here. And I do hope to live to 100. I love it so much, I don’t want it to end.”

Photo of Gloria Steinem in 1972, from Wikimedia Commons.

The Story of Iconic Feminist Dorothy Pitman Hughes: “With Her Fist Raised”