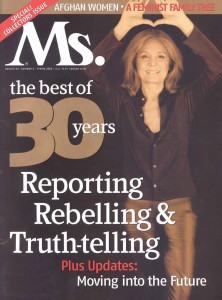 In the terrific new HBO documentary running this week, Gloria: In Her Own Words, we see some priceless early footage of Ms. cofounder Gloria Steinem in the first New York offices of the magazine–a cramped space in which editors seemed to be working elbow-to-elbow. But the dormitory-like conditions just seemed to add to the sisterhood and excitement: These women were creating, from scratch, a magazine like no other before it. It wouldn’t be about “beauty” or fashion or cooking or housekeeping or keeping your husband happy, unlike all the other “women’s” magazines. Instead, inspired by the “Women’s Liberation Movement”–as feminism was called at the time–it would be a magazine for women, by women, about what really mattered to women: our right to live our dreams and desires and aspirations with full equity and justice.

Watching the film, I learned that Ms. wasn’t the first choice as the name of the publication. The staff considered Sojourner, but decided that it sounded like a travel magazine. Or Sisters–but that sounded too religious. They landed on Ms. because it was both short and symbolic–women shouldn’t have to be identified by whether they were married or not! And thus was born a magazine that helped propel a movement.

The first issue sold out in a week. TV broadcaster Harry Reasoner predicted Ms. wouldn’t last because everything was said in the first issue. He later ate his words.

In fact, Ms. will be celebrating its 40th anniversary next year. While so many other magazines have fallen by the wayside, the flagship of feminism continues to sail on. Harry Reasoner was so wrong: We never run out of things to say about the local and global challenges women face, and what we’ve been able to accomplish against all odds.

Gloria is still a consulting editor for the magazine, though she long ago left its day-to-day operations to others while she traveled the U.S. and the world promoting feminist ideals. Because of her tireless work, she remains an inspiration to so many–as does the magazine she launched. We’re told all the time by readers how much Ms. means to them. Just the other day, after screening a DVD of the film for our interns, one told us how she had discovered Ms. in her small-town library and suddenly realized that she wasn’t alone in her beliefs.

So don’t miss Gloria: In Her Own Words (it shows a number of times this week). For those of us who lived through the first years of the contemporary feminist movement in the late 1960s and 1970s, it provides both a nostalgic look back and a rekindling of fervor. And for those who have come along since, it’s an important historical document. On top of that, it’s a touching portrait of a women who’s as dynamic as ever at age 77.

Oh yes, and don’t forget that Ms. is still going strong as well. Check out our latest issue, and join the Ms. community. Be part of the ongoing history that Gloria Steinem helped create.

Katherine Spillar is the executive editor of Ms., where she oversees editorial content and the Ms. in the Classroom program.

Inside the Fall Issue of Ms. 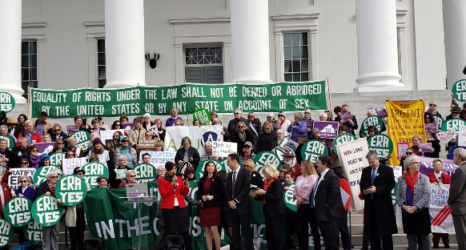 Fuel Our Critical Reporting on the Equal Rights Amendment

Amy Coney Barrett is a Grave Threat to Women’s Rights
Native Women Earn 60 Cents on the Dollar of White, Non-Hispanic Men
Democrats Unveil Plan To Rein in the Presidency Once Trump’s Gone