Women Must Vote in 2012 - Ms. Magazine
Skip to content 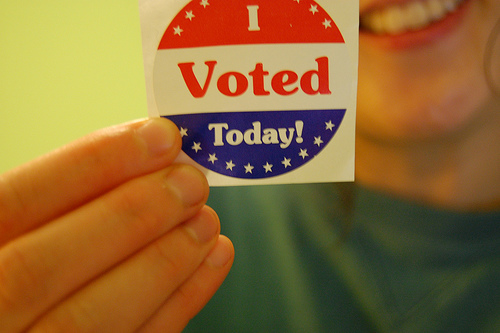 By Eleanor Smeal, President of the Feminist Majority Foundation and Publisher of Ms. Magazine

The Feminist Majority Foundation and Ms. magazine are proud to join a number of organizations representing millions of American women in an effort to mobilize women voters in 2012 around preserving women’s health and economic rights.

Right now, a slew of historic gains for women are under threat of being weakened, cut, or eliminated by extremist policies at the local, state and federal level. These attacks–on Medicaid, on Social Security, on Medicare, on the Affordable Care Act, on the Equal Pay Act, on the Violence Against Women Act, on family-planning, on workplace protections against sex discrimination, and more–are attacks against women, plain and simple.

HERvotes has released a list of the top 10 historic advances for women’s lives and security that are under threat.

These laws weave the safety net that ensures that women and other vulnerable populations are protected at times when we are ill, poor, unemployed or discriminated against. It’s unjust for leaders to prioritize Wall Street corporations over Main Street women and families.

Our best hope to keep the safety net in place is our collective voting power. That’s why, from now through Labor Day, Ms., the Feminist Majority and dozens of other women’s groups will be blogging about the real-life effects of the attacks on women’s rights. Check back here daily for more women raising their voices in defense of our rights.

Women must mobilize, register, and flex our electoral might to hold onto our crucial health and economic rights. Join the effort by blogging, Tweeting under the hashtag #HERvotes, supporting efforts to register women to vote, and most of all, helping the highest number of women in history to vote in 2012.

It’s been an honor to work with a number of extraordinary women to launch this campaign–and the list continues to grow! My heartfelt thanks to: