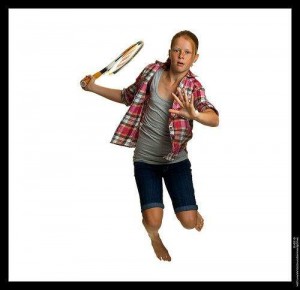 It’s very easy for me to imagine life without Title IX. That’s because I already lived it.

I was quite the little jock growing up. I spent every evening after school skateboarding, or playing ball in the street with my neighborhood buddies. In the summers I played tennis and swam. But when the boys I played with were old enough for Little League, they joined teams. I couldn’t. I was (still am) a girl.

When I got to high school, there were no interschool sports for women. We just had annual “play days,” which were ridiculously non-competitive. I liked to compete–it brings out your best game, and that of your opponents. I wanted to play hard, play well, play fair. And all I could do was watch while the guys had all the fun.

Finally, when I got to college, UCLA had started a fledgling intercollegiate sports program for women. I joined the basketball team in my sophomore year, and had a fabulous time on it for the next three years. Sure, we didn’t have very good coaching, wore ridiculous stretchy-blue uniforms and never traveled further than Fresno to play another school, but at last I was competing. Even the old “girls’ rules” for basketball were dropped, and I was amazed to learn that I had the stamina for the same fullcourt game that boys and men played.

Before long young women were getting scholarships to play sports! The coaching got better and better. The uniforms got cooler. Teams got to travel all over the U.S. Girls who liked sports could dream about all the opportunities it would bring them, both while they were playing and later–when they could apply the lessons of teamwork and practice and commitment and focus to life’s other challenges.

You want to know what Title IX has meant to girls and women in sports? High school girls’ participation has leaped from about 300,000 [PDF] to more than 3 million over 40 years. And in Linda Carpenter and Vivian Acosta’s latest report on their amazing 33-year longitudinal study on women in intercollegiate sports, we learn that the number of women’s college teams has risen from 2.5 per school in 1970 to 8.64 in 2010, and the number of women sports competitors has grown from 16,000 in 1968 to more than 180,000 in 2010.

Why has participation risen so dramatically? Among other reasons, write Carpenter and Acosta, we’re into the second generation of Title IX beneficiaries, so women athletes who themselves reaped the whirlwind of Title IX now expect their daughters to have the same, if not better, opportunities. Also, a “long line of successful Title IX lawsuits” has encouraged college administrators “of good will” to comply with Title IX’s requirements. If they don’t, the consequences can be heavy.

Of course Title IX didn’t just affect sports, but all sorts of educational offerings. On just one personal note, when I attended MBA grad school women composed just 10 percent of my class. The national average of women entering MBA programs has tripled since then. There’s still a way to go, but at this point there’s no turning back.

Unless Title IX is crippled by lawmakers. We can’t let that happen. Vote!!!