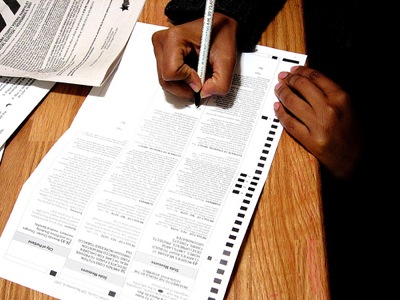 This Friday marks the 91st anniversary of women’s suffrage in the U.S. Yes, many of our grandmothers and great-grandmothers lived in a time when they weren’t allowed to vote. And for African Americans, the right to vote didn’t truly come into full effect until the Voting Rights Act of 1965.

But now, armed with that right, it’s more important than ever for us to use it.

That’s why a new national coalition of women’s organizations, representing millions of women, has launched HERVotes: to remind women just what’s at stake in the coming year’s elections. If you’ve been reading Ms. magazine and the Ms. Blog, you’re certainly aware of Congressional attacks on Social Security, Medicare, Medicaid and the Affordable Care Act. And on a state level, reproductive rights are under siege, while jobs in which women predominate–and services which benefit women and their families–are being cut to the bone.

Ms., together with HERVotes, urges women to fight these attacks at the polls, and insist that any forthcoming economic blueprints boost jobs and services for women, who are critically important to the nation’s survival and growth.

Moreover, HERVotes is sounding the alarm about 10 historic laws that are now at risk–laws that are vital in women’s lives. Over the next two days, the Ms. Blog will be part of the HERVotes Blog Carnival, in which a variety of activists and writers will weigh in on these various laws and the personal impact they’ve made on each of us. We’ll keep you informed, but we need you, Ms. Blog readers, to help us spread the word: Blog it, Facebook it, Tumblr it, tweet it!

For starters, here’s a rundown of the 10 historic laws that are so crucial for us to save, and notes on how they’re under siege:

The 19th amendment, which we celebrate Friday, guaranteed suffrage to women after a 70-plus-year fight. Since then, women have surpassed men both in the proportion and number of voters. But here’s the threat: Conservative legislatures in 30 states are trying to turn back the clock to the 19th century, when only privileged white males could vote. Newly imposed ID requirements in some states target women, students and people of color. And did you know that as many as 32 million women of voting age don’t have documentation with their current legal name? That could knock them off of voter rolls–which is just what some conservatives hope to do.

More than half (56 percent) of Medicare beneficiaries are women [PDF]–including younger adults with permanent disabilities as well as seniors. The threat: This critical health insurance program would be destroyed if the conservative majority of the House of Representatives has their way. The 2012 budget bill the House passed would effectively end Medicare and replace it with private insurance vouchers, thus increasing out-of-pocket health-care costs and limiting benefits and choice of doctors.

This “Great Society” program provides 19 million women[PDF] of all ages access to health care. Among the elderly, nearly seven in 10 who rely on Medicaid assistance are women. The threat: The conservative House wants to deeply cut the program and turn it into block grants to states, which would limit benefits for millions of women in need.

This law prohibits employment discrimination on the basis of race, color, religion, national origin–and sex. It has been central to expanding women’s economic opportunities by covering all sorts of employment actions, from hiring to promotion to termination to working conditions. The threat: Conservative U.S. Senators and the conservative majority on the U.S. Supreme Court have weakened employment discrimination laws, putting women’s rights in jeopardy.

More than 5 million people receive reproductive and other health care through federally supported Title X clinics. Far from a conservative institution, Title X was signed into law by President Richard M. Nixon. The threat: In 2011, the U.S. House voted for the first time to completely defund Title X. While that didn’t become law, nine states have reduced family planning funding through legislation, and New Jersey has eliminated it through a governor’s veto.

Abortion was legalized nationwide when the Court held that the right to privacy under the 14th amendment extended to a woman’s right to an abortion. The escalating threat: Anti-abortion members of Congress have introduced bills that would make all abortions illegal and essentially overturn Roe v. Wade. On the state level in 2011, more than 1,000 pieces of legislation have been introduced and 162 bills passed to restrict abortion and/or family planning access–the most such legislation since 1973.

This was the first federal legislation to acknowledge the severity of domestic violence, sexual assault, stalking and other violent acts against women. The threat: VAWA must be reauthorized by the end of 2011 or else it will expire. It also needs updating and strengthening to help protect students from sexual harassment, assaults and other violence on campuses.

The recent health-care insurance legislation passed by Congress and signed into law by President Obama is a boon for women: Among other significant provisions, it covers at no additional cost well-woman preventive services such as annual visits, contraception, mammograms and other cancer screenings, prenatal care and domestic violence counseling. The threat: State governors and conservative members of Congress and state legislatures have pledged to repeal the act, thus denying women of all ages access to affordable preventive-care services.

Women’s votes are vital to ward off these threats, so let’s harness the power women already have! Women voters turn out at a higher rate than men–60.4 percent versus 44.7 percent in 2008, according to the Center for American Women and Politics–but we can’t be complacent. From Women’s Equality Day 2011 to Election Day 2012, we have to reach out to our mothers, our daughters, our neighbors and our community to urge them to VOTE!

All of our lives depend on it.