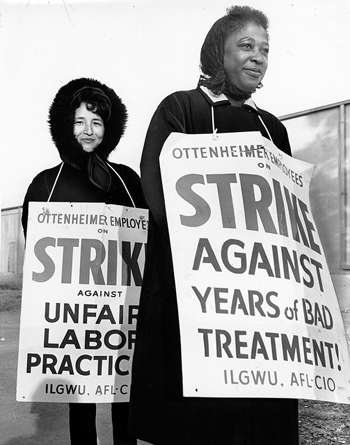 When Wisconsin started the current mushrooming, multi-state siege on the collective bargaining rights of workers, few recognized this as a rollback of a major gain of the women’s movement. Yet women’s organizing has been pivotal to earning workers’ right to equal wages, job security and decent working conditions. Nearly half of all union members today are women; we are expected to become the majority in a few years. Workers of color and transnational (im/migrant) women are the fastest-growing segment of new union members. With 12 percent of U.S. households run by women and 19.2 percent of children living with single mothers, the right to unionize and to collective bargaining is pivotal to women’s struggle for equality.

There was a time when many U.S. women worked 16-17 hours earning $1.20-$2.00 a week under hazardous sweatshop conditions, often made to bring their own machines to the shop or to purchase even needle and thread from their employers. Times when women workers made to live in dormitories “for their own good”–virtual prisons which gave employers 24-hour access to a workforce. Leave for maternity, illness or vacation was unheard of, along with medical benefits, worker’s compensation and pension plans. Moreover, women’s labor was considered less valuable than men’s and was paid accordingly.

So accepted was this idea that women workers had to organize independently to address the specific characteristics of their exploitation. The United Tailoresses of New York launched the first all-women strike in 1831, turning out 1,600 women. It rendered visible the transformational character of the women’s struggle, forever changing the face of labor organizing.

When the shoemakers’ strike broke out in Lynn, Massachusetts in 1861, male workers earned $3 a week to the $1 that women workers made. A thousand women workers marched with the men through a blizzard, holding aloft banners, placards and flags. Women shoebinders and stitchers would join in to create the largest strike of the time.

By 1867, Cigar Makers would become the first national union to accept both women and black workers. In 1903, in the aftermath of rally by mills children led by Mary Harris “Mother Jones” in Philadelphia, the National Women’s Trade Union League was born. Established by the American Federation of Labor, with Mary Morton Kehew as president and Jane Addams as vice-president, the NWTUL agitated for restrictions on work hours and child labor and for a minimum wage law. Six years later, the “Uprising of the 20,000” would erupt in New York City, when female shirtwaist workers went on the largest strike by women in history.

It has been a brilliant history of struggle for wage parity, job security and safe work places. However, despite two centuries of effort, parity is still not with us. White women make $0.77 to the male dollar, black women, $0.64 and Latinas, $0.52 [PDF]. The right to organize and to bargain collectively is pivotal to the achievement of wage parity. But parity is not enough–to paraphrase Gloria Steinem, the goal is not simply to ask for an equal share of the same pie but to bake a new pie altogether.