Ode to My Father-And Against Violence - Ms. Magazine
Skip to content 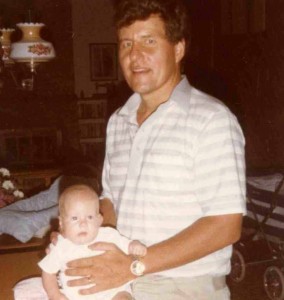 Twenty-five years ago to this day, August 26, 1986, my father was murdered in his law office by a former woman client who had stalked him and repeatedly asked him to run away with her. He had rejected her offers, brushing her off as “that crazy Linda.” But on this day, when he turned her down again, she pulled out a gun. After firing two shots through my Daddy, she turned the gun on herself, perhaps deluded into thinking she’d finally be with my dad in the afterlife.

This was stalking at its worst. Violence at its worst. This was the film Fatal Attraction come to life in the most horrifying way, haunting my own life every day since.

Of all people, I have firsthand experience of how violence can be executed by women. Yet, here I am, fighting against the repeated oppression and abuse of women by men. Statistics show that 85 percent of domestic violence cases are carried out by men. Women may be murdered when attempting to leave the abusive relationship, and if they manage to survive they have still suffered emotional abuse, psychological terrorism, long-term stalking, rape, sexual humiliation, extortion and the torture and murder of pets.

According to the National Violence Against Women Survey published by the Department of Justice in 2000, nearly 5 million rapes and physical assaults are perpetrated against U.S. women by their intimate partners each year–about 2 million more than are committed against men. Nearly a quarter of women (compared to 7.5 percent of surveyed men) said they’d been physically or sexually assaulted by an intimate partner at some time in their lives.

There is one significant piece of federal legislation that stands between women and violence: the Violence Against Women Act (VAWA). First signed into law in 1994, it’s up for renewal again this year, or else it will expire. VAWA works to protect children, teens and adults against domestic violence, helps coordinate law enforcement against such violence, and supports community-based efforts to end domestic violence, stalking, sexual assault and dating violence.

Our votes count if we want to end violence. I can’t bring my father back, but I can still speak out against the most common violence in our society, and it’s against women.

Photo of the author and her father, Victor John Daniel, who was murdered at age 39 when she was 3 years old.

McKenna Daniel-Nelson is an emerging young artist, designer and author. Having studied women’s studies at the University of Colorado at Boulder, she is well versed in the politics of power, gender norms and ideologies, rape culture and gendered violence.