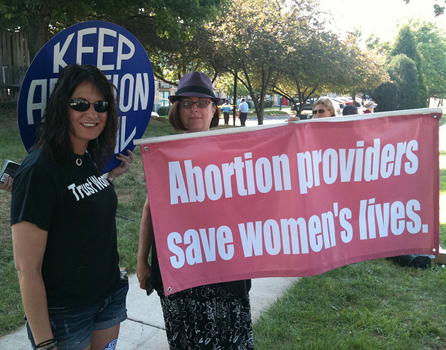 Imagine if, before she could stitch up your cut or extract a tooth, your doctor or dentist had to remodel her office to meet the same standards as a hospital. Most doctor’s offices don’t have five-foot-wide hallways, sinks with hands-free faucets, 250-square-foot operating rooms or exam rooms with a clear floor of 80 feet. Nor are they required to apply for a Certificate of Need requiring the approval of the politically-appointed state health commissioner. Faced with such onerous regulations, most doctor’s offices would have to close.

Unfortunately, that’s exactly what’s happening to Virginia’s abortion clinics. In February, the state assembly passed an emergency law directing the State Board of Health to regulate Virginia’s 22 first-trimester abortion clinics as if they are hospitals. On Friday, the Department of Health issued a draft of the new regulations, which will be voted on at a public meeting on September 15. The regulations don’t effect other outpatient clinics–just any place that provides five or more first-trimester abortions a month–making clear their intended effect: the shutdown of those clinics. As Jill Abbey, who manages four Virginia clinics, told ABC News,

Colonoscopies, dental surgery and plastic surgery are much more invasive than the abortions we provide, and they are not being asked to live up to this kind of strict regulation. That tells you right there that this is not about safety, it’s about politics.

Additionally, the regulations on which these new ones are based were intended for new hospitals, not existing clinics. And though proponents claim to be “protecting” women’s health, Dr. William L. Harp, Executive Director of the Virginia Board of Medicine, told the Richmond Times-Dispatch that abortions only account for one or two disciplinary cases per year, meaning that about 26,998 abortions are performed in Virginia every year without any problems. No evidence exists that the clinics as they function now are unsafe. In fact, Maribeth Brewster, a spokesperson for the Virginia Department of Health, told the Huffington Post that they wrote the new guidelines without even considering the current state of abortion facilities in Virginia.

Elizabeth Nash, a public policy analyst with the Guttmacher Institute, and Tarina Keene, executive director of NARAL Pro-Choice Virginia, have called the regulations the most onerous in the nation. Laura Meyers, chief executive officer of the Planned Parenthood clinic in Falls Church, told The Washington Post that the clinic there will probably not be able to comply with the new regulations because they rent their space and cannot remodel. Given that most first-trimester abortions involve medication and not surgery, she added, “Why would a wider hallway have anything to do with taking a pill?”

These laws may be the most extreme, but they are not the only troubling ones. According to The Guttmacher Institute, in the first six months of 2011, states proposed over 1,000 restrictions on abortion access and passed 162. Most are being challenged in court, costing state governments hundreds of thousands of dollars to defend laws that should ultimately be found unconstitutional. Kansas recently passed similar TRAP laws, or “targeted regulation of abortion providers,” but they were temporarily blocked by a judge and court challenges there are ongoing. The Virginia Coalition for Women’s Health is considering similar challenges in their state. A Texas law requiring sonograms for women seeking abortions was recently partly blocked by a judge thanks to a Center for Reproductive Rights lawsuit.

If such regulations go unchallenged, Dahlia Lithwick of Slate conjectures,

Abortion will become all but impossible in America—for poor, minority, and rural women in particular—in direct contradiction to a Supreme Court decision, and the court itself will have done nothing to stand in the way. Is that what supporters of the right to abortion, not to mention the rule of law, really want? At the very least, let’s put it to the test.