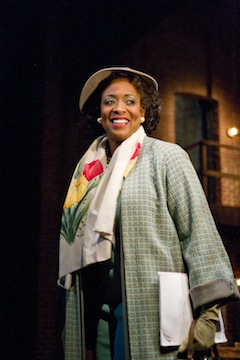 When The Help premiered earlier this summer, African American feminists bemoaned the lack of civil rights narratives told by the black women who actually lived through the era. Though it probably won’t be a Hollywood blockbuster, a bulwark American theater is about to open a civil rights play written by an African American woman. In the process, a long lost gem of the American theater might be on the verge of rediscovery.

Arena Stage in Washington, D.C.–founded in 1950 by theater matriarch Zelda Fichandler and run now by Molly Smith–is producing Trouble in Mind, authored by little-known African American playwright Alice Childress. Childress, of the same generation as Lorraine Hansberry (A Raisin in the Sun) and as well-known in her time, has been almost forgotten today. Both women were mentored by Paul Robeson and W.E.B. DuBois, both lived and worked in New York, both were largely self-educated and they were good friends and colleagues. But apparently there’s only room in the canon for one black woman, so while the wonderful Hansberry is featured in almost every major anthology of American drama, hardly anyone even recognizes Childress’ name. Most of her plays are out of print.

Alice Childress grew up with her mother and grandmother in Harlem in the 1920s, dropping out of high school after they both died. She educated herself with visits to the public library, learning about the structures of plays, books, and short stories by consuming Shakespeare, Walt Whitman, Paul Laurence Dunbar, Sean O’Casey and books on African American history. As a single parent, she worked to support herself and her daughter as a salesperson, assistant machinist, insurance agent and domestic worker. Her plays give voice to the real working-class African American women she met in those jobs.

In the 1940s, Childress co-founded the American Negro Theatre, for which she acted and where she also found her voice as a writer, claiming that “racism, a double blacklisting system, and a feeling of being somewhat alone in my ideas caused me to know I could more freely express myself as a writer.” She became the first African American woman to have a play professionally produced with Gold Through the Trees, a musical revue of slavery and resistance throughout the African diaspora. Her plays incorporate the liturgy of the black church, traditional music, African mythology, folklore and fantasy, connecting the Harlem Renaissance to the Black Arts Movement both chronologically and aesthetically. Wedding Band: A Love/Hate Story in Black and White, Wine in the Wilderness and her 15 other plays are socio-political, romantic, biographical, historical and feminist.

We have cajoled, pleaded, tommed, protested, achieved, rioted, defied, unified … you name it! But white supremacists have dug their heels into the ground and will settle for nothing less than outright confrontation in the streets of America.

In an effort to counter the prevailing depiction of African American women on stage as maids and mammies, Childress created strong woman protagonists with minds of their own. She continued writing into the late 1960s.

Trouble in Mind, written in 1955, tells the story of a newly integrated theater company rehearsing a play for Broadway about race. Ironically, Trouble in Mind itself was optioned for Broadway but never produced there because Childress refused to give it a happy ending. In the play, a group of actors (led by Wiletta, an African American woman) and Al Manners, their white director, stumble their way around real race issues in an effort to mount a socially palliative play that the white artists believe will improve race relations. But real life has a habit of getting in the way of fictions like these, and eventually tempers flare over the black dialect, the unflattering portrayal of black mothers and the rehearsal techniques of the director–a Method man who pushes Wiletta to express emotions she doesn’t really feel.

According to the play’s director, Irene Lewis, who was until recently the artistic director of Baltimore Centerstage,

For years, the play was recommended to me as a show that I should produce. I had read the play several times over the years and found it to be “old-fashioned/old hat,” especially concerning the depiction of the character of the white director. Finally, I decided to ask the opinion of an African American actress whose judgment I have always valued. She read the play and told me that she liked it. When I asked if she found the role of the white director dated and unbelievable, she said, ‘No.’ So I came around to the opinion that this was another case of–what should I call it–whites (me) being ‘out of touch’ with the experiences of African Americans. I decided to produce and direct the play at Centerstage in Baltimore. It subsequently transferred to Yale Repertory Theater. I am delighted that Molly is bringing this groundbreaking piece to Arena Stage.

The metatheatricality of the play provides plenty of room for commentary on race relations in the 1950s. But it also seems to be finding relevance, at long last, in the present. Trouble in Mind was presented in simultaneous readings around the country in June by Project1Voice, a national grassroots movement designed to support and cultivate artistic excellence, creativity and innovation among African American theater organizations. Curious as to how the sudden interest in Childress’ work fits into our current national dialogue on race, the Ms. Blog spoke not only with Lewis but with Marty Lodge, who plays the white director, and with E. Faye Butler, who plays Wiletta.

Ms. Blog: In what ways are the issues presented in the play a product of the past, and in what ways do they speak to us directly in the now?

BUTLER: It’s not a dated piece. The thing most people think who’ve heard it or seen is “Oh, what an interesting subject–to take something that is so present day and put it in the ’50s.” I say it’s not a piece that was written in present day. A lot of people, especially actors or people in the arts, always find it amazing that it’s written in ’55. They always think it’s a new piece.

LODGE: Things haven’t really changed that much. Wiletta is complaining that she plays all these mammy roles, and here in this day and age Viola Davis is still playing maids. So what has changed? There really aren’t that many great roles for middle-aged African American women. There are still plenty of Al Mannerses around. They think they’re open-minded and they’re not.

BUTLER: It’s that same old thing even when you go into casting and people will say to you, “Wow you really read that well.” You’re like, Yeah, I’m trained. But a lot of people think … you know that old adage–you’re not black enough, or you’re not white enough. People go, “Can you be more, you know, ‘urban?'” That’s the new thing, they say “urban.” I say I’m as urban as I can be: I’m black.

I always tell the story about my agent calling me saying there’s this famous director that’s interested in you for a play in London. So I get the side, and the side says, “Character sits on porch with kerchief on her head. She moans, groans and sings a spiritual.” I said, “You want me to come to an audition in New York to moan and groan and sing a spiritual? Have you lost your mind? Thank you, no.” No matter how far you think you’ve come, there’s always somebody that wants to take you right back. Why are we still telling that story? There are other stories to be told besides maids and servants. I think everybody needs to see this piece because it reminds us where we lie.

I was interested in the description of how Lewis came to direct the play and her original concerns about the character of Al Manners. Marty, do you feel like the character is stereotypical or unbelievable?

LODGE: He’s not like some stereotypical white guy in an all-black play. He’s nasty, but he’s nasty to everybody. He’s just kind of rude and self-centered. He fancies himself a liberal, open-minded guy, understanding and compassionate. He really believes he’s doing a cutting-edge play addressing things that hadn’t been addressed yet. He thinks he’s helping the cause. It’s not until the very end, when he blurts something out, that you find out, well, maybe all those liberals aren’t as liberal as you think they are.

LEWIS: [Childress is] such a good playwright. She doesn’t shove anything down your throat. She just lays it out there in a very graceful but strong way. I think it’s illuminating as well as extraordinarily entertaining. I mean, this is funny.

What’s it like working with such strong women leaders on this play?

LODGE: I never thought about it, but it’s true: It’s a theater run by a woman, and I’m playing opposite a really strong lead woman. And I kind of love it. [Lewis] is very brave and she is not afraid to say what she thinks.

Irene, how has being a woman affected your career as a director?

LEWIS: When I came up there were three women in the country who ran theaters. And they were spread out all over the map. What it took to get on the mainstage was very similar to this play. It was very similar in the way they spoke to you: “Don’t worry your pretty head about that.” It took me two to three years to have the nerve to say, “Please don’t say that.” It took me a long time to develop confidence. [As an artistic director], I like to mainstream a woman director, because you put the stamp of approval by hiring somebody and then another theater will hire her.

Do you think this play will lead to an Alice Childress renaissance?

LEWIS: No, I don’t. I mean, why hasn’t it already happened? Most theaters haven’t done it and I don’t think it’s necessarily because they haven’t heard of it. Black directors always bring it up. It was a natural for me, but people are gonna be what they are. All I can do is do my work and then see.

Well, a girl can dream.

Trouble in Mind runs September 9 through October 23 at Arena Stage in Washington, D.C. Two special events allow for dialogue around the issues in the play: “Making Trouble: Women and Minorities in the Arts,” on Sat., Sept. 24 from 2–3 pm, will be a discussion about gender and minorities in the arts from Trouble in Mind to present day; “Black Face in the Media,” on Wed., Oct. 12 from 6–7 p.m. will be a conversation about the influence of media in the fight for racial equality in the United States from the late-1940s onward.

TOP: E. Faye Butler as Wiletta Mayer in the 2007 production of Trouble in Mind at Baltimore’s Centerstage. Photo by Richard Anderson.