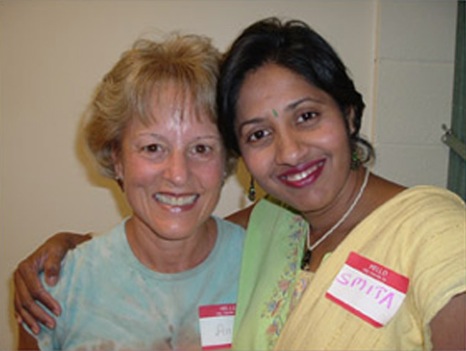 This will come as no surprise to the readers of Ms., but when women get together, boy can they get stuff done.

This weekend in Syracuse, New York, a group called Women Transcending Boundaries (WTB) will host a variety of 9-11 commemoration events, including a memorial service, neighborhood trash pickups, clearing a walking trail and more. The goal of the “Acts of Kindness, A-OK Weekend” is the same as the group’s founding mission: to bring people together across boundaries of religion and culture in order to better their communities.

WTB came into being just weeks after the 9/11 attacks, when cofounder Betsy Wiggins reached out to the Islamic Society of Central New York, the largest mosque in Syracuse, to see if Muslim women needed help with transportation, grocery shopping, or anything else. She told them:

I am ignorant about Islam, far more ignorant than I want to be, and I want to do something, and I’m especially concerned about Muslim women. Can you tell me someone I can talk to?

They connected her to Danya Wellmon, a woman leader at the mosque, and a friendship was born. Wellmon was glad to hear from her because, as she told PBS,

We did get the phone calls, the harassment. Many Muslim families kept their children home from school, you know, there was the name calling. I know myself, I was run off the road one time and called a terrorist, and it was very scary.

Rather than retreat, Wellmon seized the opportunity to be an ambassador for her faith. She told WRVO: “These people hijacked the Islamic faith, and I wanted to get out and to tell people that this is not who we are.”

The group began meeting monthly at local places of worship. Though Wellmon initially had trouble convincing other Muslims to join her, the group continued to grow and to reach out to more women from diverse traditions. Today their programs include introductions to Jainism, Sikhism, Baha’i and Native American traditions, international dinner fundraisers for women’s causes, and local service projects for refugee women and children. They discovered that:

One need not look far for evidence of these women’s success in building bridges in their community: in a stark contrast to the mounting friction around the country over constructing new mosques, the Islamic Society of Central New York is about to build a new Islamic center in Syracuse –right next door to a Baptist church.

From the small victories of helping one another through personal crises to the big job of bringing their community together, Women Transcending Boundaries is a truly feminist response to 9/11.