By Any Other Name - Ms. Magazine
Skip to content

Being evan­gel­i­cal and in my mid-twenties means that sum­mer (and, to a lesser extent, fall, win­ter and spring) for peo­ple my age is wed­ding sea­son. And boy, is it ever. From June until August I can count 16 wed­dings off the top of my head that were cel­e­brated–I was going to say that at least 32 peo­ple I know got mar­ried this sum­mer, which is true, but only because I am appar­ently friends with quite a few cou­ples. These wed­dings have occurred all over North Amer­ica, from Van­cou­ver to Vir­ginia to the Mar­itimes, and they have all var­ied (how­ever slightly) in style and theme. How­ever, there is one con­stant that exists between all of these new mar­riages: Every new­ly­wed woman has changed her last name to her husband’s.

Now, I know that this is in no way a new phe­nom­e­non, nor is it an uncom­mon one. And I know that, when we are discussing the sub­ject of a woman’s choice, want­ing some­one to have a choice means I also want some­one to have the oppor­tu­nity to make a choice I may per­son­ally dis­agree with, and it’s none of my busi­ness if they do. How­ever. There still exists in the evan­gel­i­cal commu­nity and often­times in the broader West­ern cul­ture at large the idea that a woman should, or even must, take on a new last name should she choose to get mar­ried to a man. And the delight that is Face­book allows a woman to “change her name” before any­thing is legal about it.

The advent of Face­book and other social networking-type sites brings a very inter­est­ing new com­po­nent to the mix of the dis­cus­sion of chang­ing one’s name or not when marrying: peo­ple get to com­ment on your name change! I’ve noticed peo­ple “lik­ing” statuses that say “Off to legally change my name!”; lots of “Con­grat­u­la­tions, Mrs. _____” once a name change has occurred; in a cou­ple of cases, “You aren’t First­Name Last­Name any­more! Don’t for­get to change it!!!!” or even just a com­ment that says [I will assume excit­edly and congratulatorily] “First­Name NEW HUSBAND’S LAST NAME!!!” The assump­tion that each of these women have or will change their last names, or the assump­tion that it’s some­thing inher­ently excit­ing and pos­i­tive abounds, and I am always curi­ous about what would hap­pen if one of the newly mar­ried women in ques­tion replied, in just as a cel­e­bra­tory tone, “Oh, I’m keep­ing my name! But wow, am I glad to be married to ____!” or some­thing like that.

The fact that this has been on my mind a lot lately has a lot to do with the sheer vol­ume of post-nuptial name changes I’ve been see­ing over the past few months, and the more I see, the more I wish that at least one of my girl­friends would keep her last name, or maybe even hyphen­ate! Or, at least, I wish there were a lit­tle bit more dis­cus­sion involved before the seem­ingly auto­matic name change.

I men­tioned this to a few of my friends, that I won­der if maybe a bit more dis­cus­sion sur­round­ing mar­riage and name changes might be a good thing? That maybe it would be okay if we didn’t auto­mat­i­cally assume every woman is going to change her name upon mar­ry­ing. These are a few of the responses I received:

“Of course I would change my name. I don’t want a hus­band I can walk all over.” (woman, early thirties).

“If a woman doesn’t want to change her last name I hope she’s happy being sin­gle.” (man, mid-twenties).

“That shows she’s not actu­ally com­mit­ted to your rela­tion­ship.” (man, late twenties).

“I would never marry a woman who could be that dis­re­spect­ful.” (man, mid-twenties).

When I asked if per­haps there might be a way to make the name change more egal­i­tar­ian, say, by hyphen­at­ing, or by tak­ing one’s new wife’s last name as a mid­dle name, or anything one can think of, I was met with mostly blank stares, and also com­plete dis­belief. The idea that a woman might not want to change her last name, or that a man might be will­ing to and that nei­ther choices would have any bear­ing on anyone’s com­mitment or mas­culin­ity seems com­pletely absurd, apparently.

As I said, I real­ize that want­ing some­one to be able to make choices for them­selves means that includes choices I myself wouldn’t make, and the fact that I will be keep­ing my last name as is gives me a pretty def­i­nite bias, but in my obser­va­tions over the past few months there really doesn’t, at least in the cir­cles I fre­quent, seem to be even some semblance of dis­cus­sion sur­round­ing whether or not a woman is truly free to choose to keep her own name, or whether any choice other than giv­ing up one’s last name could, as was my own expe­ri­ence, result in the end of a rela­tion­ship. There doesn’t seem to be any other “choice” than “a woman changes her name and is unequiv­o­cally excited about it.”

ABOVE: A 1960 wedding announcement in which a woman is forced to publicly declare that she has changed her name from Sally Ann Draper to Mrs. Chester Tolbert Dickerson, Jr. Photo from Flickr user Bertd under Creative Commons 2.0.

Reprinted with permission from Persephone Magazine. 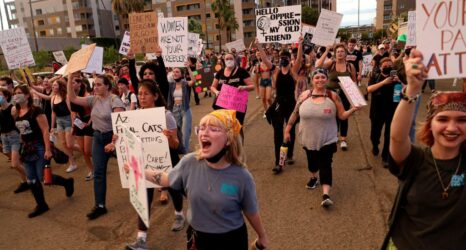