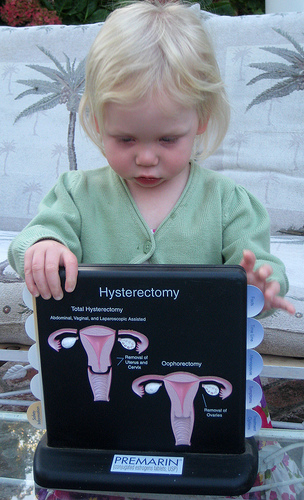 After a year spent interviewing women for a book about unnecessary hysterectomies and oophorectomies (the medical term for ovary amputations), I am dismayed that despite many medical alternatives to hysterectomy, so many American women are still losing their organs. About 600,000 women a year undergo hysterectomies in the U.S., the second most common surgery, surpassed only by cesareans.

True, some women who elect to have hysterectomies do not agree that cancer is the only valid reason. Kathleen, for example, told me she had suffered for years from fibroids and endometriosis, a condition in which uterine cells grow outside the uterus and react to monthly cycles. Kathleen was practically disabled for three days every month, and got no relief from a variety of other treatments. She finally had surgery to remove her uterus and all the wayward cells, but kept her ovaries and cervix. She feels better now than she has in years.

But other estimates of the rate of unnecessary hysterectomies allow for women like Kathleen and are still shockingly high. An expert panel looked into the issue in 2000 as part of the Women’s Health and Hysterectomy Project, conducted by a branch of the U.S. Department of Health and Human Services. The panel developed its own criteria for when hysterectomy was appropriate and also considered criteria set by the American Congress of Obstetricians and Gynecologists (ACOG). Their findings: 70 percent of the hysterectomies were recommended inappropriately according to their criteria, and 76 percent didn’t meet the criteria of the ACOG.

Using the 70 percent estimate, a staggering 420,000 women every year might be able to avoid a hysterectomy. And since half these women usually lose their ovaries, 210,000 could avoid the additional threat to their health that is the consequence of that loss. (Of the 210,000 whose ovaries are conserved, somewhere between 15 and 30 percent lose ovarian function anyway.)

I would argue that what’s partly responsible for this epidemic of unnecessary surgery is the sexist attitude that the uterus and ovaries are strictly reproductive organs, essentially useless after child bearing. In fact, they are sex organs, and removing them brings about sudden, and irreversible changes to their sex lives and puts them at greater risk for heart disease and heart attack, early death, dementia, osteoporosis and incontinence, with the degree of added risk depending on a woman’s age at the time of surgery. These risks come as a surprise to most women because most gynecologists continue to offer hysterectomy as the routine, standard, unremarkable cure for problems such as fibroids (non-cancerous tumors), heavy menstrual bleeding and endometriosis. It is shocking that this continues after decades of research and development of alternative procedures, including one of the oldest, removal of the fibroids only.

Women react with horror to clitoridectomies because of the savagery of the cutting and because they know it means a life-long loss of pleasure. But so do hysterectomies. Many, although not all women, feel their orgasms in their uteruses. When that organ is gone, they will never enjoy that intensity of feeling again. I know because I did enjoy such orgasms, a whole-body rush with my uterus rhythmically contracting. I now realize with regret that I could have avoided that loss with surgery to simply remove the tumors. My female gynecologist led me to believe there was no alternative. I was in my early 40’s; the average age of women undergoing hysterectomy is 42.

Can you imagine men reacting calmly to loss of feeling in their sex organs? What would they do after they learn that the loss could have been avoided? Or how about suggesting to a man that because he’s had all his children, he might as well have his testicles removed to avoid the slim chance of testicular cancer? Do you think doctors would dare make that suggestion? Yet women I’ve interviewed say their doctors use fear of rare ovarian cancer to justify removal of healthy ovaries. Lacking good information about the actual risks, they often consent.

In fact, if you want to survive until old age, hold on to your ovaries. Dr. William Parker, clinical professor at the University of California at Los Angeles School of Medicine, lead a study of almost 30,000 women followed for 24 years to compare what happened to those who had a hysterectomy but kept their ovaries with those who had both a hysterectomy and bilateral oophorectomy.

Using data from this landmark Nurses Health Study, he found that women who had their ovaries removed had a higher risk of early death from any cause than women who did not, primarily from heart disease and lung cancer. “For every 24 women having bilateral oophorectomy (removal of both ovaries), at least one woman will die prematurely from any cause as a result of the oophorectomy,” the study concluded. “…at no age was oophorectomy associated with a survival benefit.” Over the 24 years, 686 women died from coronary heart disease and lung cancer, while just 37 died from ovarian cancer. Furthermore, he calculated, if you start with two hypothetical groups of 10,000 women, and one group retains their ovaries while the other does not, 858 more women will die in the group without their ovaries before the age of 80. In the group that kept their ovaries, only 47 women will have died from ovarian cancer.

Why the result? The ovaries of post-menopausal women continue to deliver small amounts of hormones that are essential to a woman’s health, including testosterone. Testosterone maintains a woman’s sex drive and bone strength and gives her energy. How many marriages founder because women who’ve lost their ovaries suddenly lose interest in sex? The question has not been adequately studied.

Making matters worse is the horror show of symptoms caused by the “surgical menopause” that is induced by oophorectomy (or by hysterectomy, in the cases in which it causes ovaries to fail). The list includes severe hot flashes, sleeplessness, irritability, depression and even suicidal impulses. And in the long run, surgical menopause channels women into continuing and costly treatment for these symptoms—all avoidable by leaving women in their natural state.

Coffey resorted to a year-long picketing campaign at major hospitals in cities around the U.S., distributing leaflets and holding signs of protest along with women who had contacted her through HERS. In her book about the experience, The H Word, Coffey describes the many women who turned away from her on those street corners, avoiding discussion about their own or others’ hysterectomies. Of course, there were some people who gave thumbs up of support, and men who immediately told stories about mothers or wives whose health and well-being had suffered after the surgery; but these were in the minority.

In this climate of budget cutting, the silence about hysterectomy is even more astounding. No one involved in the health care system debate has advocated lowering the rate of hysterectomies and oophorectomies as a way to save billions of health care dollars. Besides reducing the number of women with life-threatening conditions like heart disease and osteoporosis, fewer hysterectomies would also mean fewer older women getting costly, long-term treatment for the back, bowel and incontinence problems that plague them.

Yet, in my extensive research, I have found no one who even attempted to work the numbers to see how much could be saved, not health economists at big universities or anyone in the federal government.

Carolyn Maloney, the Democrat U.S. Representative from Manhattan, once suggested she might ask the Government Accountability Office to do such an estimate but she backed off that commitment when I pressed her about it. Yet she had called out in a speech, “Where is the outrage?” to the women assembled at a meeting of HERS where I met Dr. Levine. She told that audience that she was warned off an oophorectomy by learning the facts about its consequences. She was grateful for the save, but not sufficiently to use her power to shine a spotlight on the issue.

It’s time for hysterectomy to become a feminist issue. It’s time to ask ourselves why we give up our sex organs so easily. Why are we willing to wear 5-inch heels, to bleach, shave, starve, decorate, lift, implant, glue and lace ourselves into sexy versions of ourselves—while we meekly give up sexual pleasure? And then shut up about the consequences to our health?

It’s time we had compassion for the women who have yet to face this potentially unnecessary pain. Our sexuality is diminished, our health endangered by hysterectomy and ooophorectomy. It’s time to call these operations by their rightful name—castration—and to say no, this will not continue.

Frances Cerra Whittelsey is an award winning professional writer. She was a staff reporter for The New York Times and Newsday, where she won a George Polk Award for Public Service, focusing on consumer abuses and investigations. She has also been features editor of a women’s cancer magazine, MAMM.