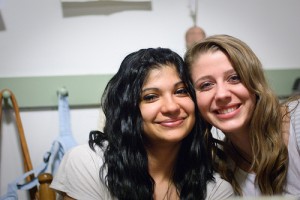 I can say with some certainty that I was bananas in love with every best girlfriend I had from the ages of 6 to 17.  The only reason the to-the-ends-of-the-earth love stops there is because that type of girlfriendship can get harder to come by as you get older. And even when you do find that person, being friends with your very own Rayanne Graff is not always yin yang symbols and Egyptian eyeliner application.

Very often it’s more along the lines of near-death experiences and Jordan-Catalano-sleeping-with betrayal.

For those of you who either did not come of age in the mid-’90s or have yet to experience the awkward teenage magic found within virtually any episode of My So-Called Life, Rayanne Graff (A.J. Langer) was the enigmatic, Janis Joplinesque best friend of straight-laced-until-she-dyed-her-hair-red Angela Chase (Claire Danes), and Jordan Catalano (Jared Leto) was a boy who would fit snugly into any bad-boy-the-teen-girl-has-a-crush-on category in which you’d like to place him. Especially if that category includes qualities like “in a band” and “secretly illiterate.”

The relationships between two teenage girls are often as staggeringly intense, intricate and complicated as friendships can get. Sure, there’s the Heavenly Creatures-style romanticism of the two of you against the world, sleeping next to each other while wearing next to nothing–and having that feel both daring and innocent all at once–requesting the Divinyls song “I Touch Myself” on the radio at midnight (look, it was 2002), spending every second between classes working on elaborate handwritten letters (again, 2002) and mastering folding techniques for said letters, immediately followed by the rush of excitement you feel when you’re finally able to give it to her or, better yet, see her again.

I was not a Rayanne in high school, but I don’t think I was an Angela either. No one is really a fictional character down to a T, but I definitely followed more than led, adored more than was adored.

In other words, my best girlfriend growing up was always some loud, endlessly hilarious, total knock-out girl in a cut-off top.

In junior high she was Sarah. Sarah had short hair and wore Z. Cavaricci jeans. She was also an amazing artist and indulged my love of creating filthy flipbooks and fake newspapers that were basically a rip-off of The Onion but based on people we knew.

If I wanted to spend the whole day speaking in regionally inaccurate accents, she would too. If I wanted to act out imagined scenes between Ginger and Baby Spice–whom I believed had a vaguely sexual relationship–she went there with me.

We were never not together. Until we were.

We went from spending every waking moment missing one another, every evening on the phone, and every weekend at each other’s house, to her completely ending all contact with me–a type of heartbreak from which I don’t know if you ever really recover.

We were getting “too close,” she needed to be friends with “other people besides you.” “Okay! That’s fine!” I said. But it didn’t do any good. She was gone.

I can’t pinpoint why she ended our friendship but I do have theories.

For one, I think our friendship blurred a lot of heteronormative lines, and from stories I’ve heard from other women this happens a lot. It doesn’t even necessarily mean either one of you is queer, but when you’re a teenager there is an overall pressure to be “normal,” and spending that much time with someone of the same sex can quickly call “normal” into question. This type of intimacy and closeness is not often socially sanctioned, as we’re told it’s reserved for your romantic partner, who–in teen years especially–is “supposed” to be someone of the opposite sex.

We did joke about it: “What if” we were gay? And the more we played house and “joked” about these things I think it started to hit closer to the truth than either of us knew what to do with. So she did something about it.

She started hanging out with the seedy boys we hated, stopped going to classes and ultimately dropped of school. Years later, I found out she’d had a baby right after senior year.

I can’t say for certain whether or not the relationship between Sarah and I was romantic, and really, that’s not the point. Either way, I think she also had a very difficult time recovering from what happened between us. And I see the effects of this type of thing in women in their 20s and beyond–seemingly shell-shocked from finally finding the girl who’ll make collages of 1930s starlets for you and cry with you until 4 a.m. while you tell each other things you can’t tell anyone, and then something happened and it was ruined.

Every so often I hear adult women say things like, “I just get along better with men,” or “I can’t stand girls” or some variation on the two. I want to believe with all my heart that those women still long for the close female friendship they had and then lost, or never had at all. I want to believe that some part of every woman remains a teenage girl who just wants to find an unstoppably kind and inspiring girl to laugh with; someone to be in total awe of.

I believe that women genuinely want to be amazed by each other. And if we can accept this instead of fearing that if we find another girl to be incredible, it will somehow overshadow ourselves–or somehow allow her to get something we want–it’s quite possible we could heal the sensitivity left behind from losing that kinship when we were younger.

And if you are one of those girls and you’re not afraid to try again, I’m around Friday night. I have a pair of pajama pants you can borrow and a plan to order Chinese food like real adults. And I’d really like to get to know you.

Photo from Flickr user wickenden under license from Creative Commons 2.0

Lane Moore is a comedian, writer, actor and impressionist living in New York City. She is currently a writer for The Onion and Ms. Magazine, editor of truTV’s Dumb As A Blog, and a former editor for Jezebel. Her writing has been featured and praised by countless publications including Gawker, Hello Giggles, SplitSider, Feministing, AutoStraddle, Poets & Writers, SXSW Comedy Festival, Gizmodo, and The Huffington Post, where she was named one of the funniest people on Twitter. Lane regularly performs stand-up, improv and sketch comedy in NYC and Los Angeles at Improv Olympic, UCB, The Laugh Factory, The Improv, The Comedy Store, and Improv Olympic and has performed alongside some of the biggest names in comedy such as Jim Gaffigan, Aziz Ansari, Todd Barry, Maria Bamford, Kristen Schaal, Neal Brennan, and Nick Swardson, among others. In 2011, Lane co-created a comic book based on her experiences in Los Angeles called Smarty Pants which can be found in stores throughout the U.S. and Canada. You can follow her on Michael Ian Black’s WitStream and Twitter.