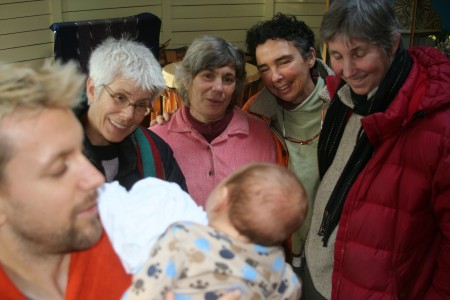 In all the media surrounding the 10th anniversary of 9/11, we failed to celebrate National Grandparents Day on the Ms. Blog. So, belatedly, we share this wonderful tale:

This is the story of what happens when two children of lesbians (each their mother’s only child) have a kid. The short version of the story: picture a swarm of grandmas circling the baby like the world’s most loving vultures.

When Andreas and I first hooked up, one of our very first conversations was about all the similarities in our lives. We were both the children of liberal parents. Both our fathers are academics. Both our mothers are lesbians and live on log cabins on islands—his in Montana, mine in Washington. As my 22-year-old self stood there in that nasty-ass warehouse on New Years Eve 1997, I thought, “That’s funny. We have a lot in common.”

Since I’m an only child, Tavi is my parents’ first grandchild. My dad retired two weeks after Tavi was born, and already has his weekly babysitting regime all set up. My mom (the retired midwife) seems to have been preparing for grandmotherhood for the last decade, and her partner (a contractor) got preemptive on her grannyhood by helping us convert our walk-in closet to a nursery before Tavi was born.

Dre’s got siblings on his dad’s side, but he’s his mother’s only child, and although she lives out of town she’s already come out for two visits. Her partner came with her for the second visit, and they brought their ukuleles (yes, they play) so that they could sing Tavi a song they’d reworked just for him.

I’m a little bit jealous of Tavi’s four grandmas. I had a measly two grandmas, and one of them was mentally ill and disowned the family when I was 12. The other one lived far away and I only saw her once or twice a year.

My son, meanwhile, gets FOUR wise women who are excited to share their lives with him. My mom can’t wait for him to be able to run around her commune. Her partner seems to already be scheming projects for them to work on together. My mother-in-law (who prefers to be called my “Outlaw Mother”) is drawing out plans for a Tavi-friendly bunk house she’s going to build out at her Montana lake cabin. Her partner, a dog-lover through-and-through, went so far as to call Tavi “little pup,” which is the highest compliment you can get from a dog person.

I may be biased, but I’m starting to think lesbian grandmas are the best kind.

Reprinted with permission from Offbeat Mama.

Photo of Andreas, Tavi and the Four Lesbian Grandmas

Author of Offbeat Bride: Creative Alternatives for Independent Brides, Ariel s the publisher of the Offbeat Empire, a network of websites for nontraditional women. She lives, loves, and dorks out hard in Seattle, WA.