The Personal Is Political and Always Has Been - Ms. Magazine
Skip to content 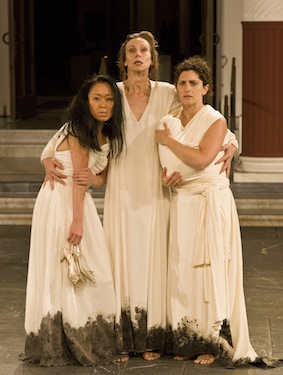 What happens when you take the Trojan women out of The Trojan Women?

The play tells the story of the end of the Trojan War, when the Trojan men have all been killed and Hecuba, former Queen of Troy, and her daughters are about to be taken back to Greece as sex slaves.

From Agamemnon to Oedipus Rex to Lysistrata, all Greek drama is told through two lenses: that of the oikos (family) and the polis (city), with the interpersonal family dramas of the characters mirroring the political dramas of war, power, and money. In Euripides’ play, the relationship between the personal and the political is personified by a chorus of Trojan women, representing not individual women but the women of the city, for whom the city’s fate is their fate. It is here that Clarke makes his biggest adaptation: He changes Euripides’ titular character from a chorus of  women to a single man, who is revealed after a few scenes to be a hermaphrodite. By changing the chorus from a group of women to a single voice emanating from the body of a male actor, the playwright attempts to separate the oikos from the polis, and in so doing reveals the truth: that you really can’t.

Without the visual and aural impact of a group of nameless and faceless women, the play becomes more about real women, and specifically the women of the royal family: Hecuba and her daughters Cassandra and Andromache. And then of course there’s Helen, the face that launched a thousand ships, the Greek beauty who Aphrodite gave to Paris as a reward for choosing her as winner of a godly beauty contest. Helen, who presumably started the whole war.

But as with all things woman, the personal is never entirely apolitical. In the adaptation, as in the original, Helen is forced to defend herself to her husband, Menelaus, who plans to kill her for her betrayal. When no one is moved by the idea that she left her husband for Paris because she was possessed by Aphrodite, she claims that she actually saved Greece from ruin. Had Paris chosen Hera or Athena as the most beautiful, she asserts, the goddesses would have granted him the military and political power to conquer Greece; so, she argues, her adultery worked to Greek advantage. Hecuba’s rebuttal is also not personal: It is a defense of the goddesses. And Hecuba’s desire to see Helen killed is not rooted in sexual jealousy, as Helen presumes, but rather a desire for vengeance on behalf of her country and her family’s losses.

Though the characters make the same arguments in the original, they gain resonance in their new form. The absence of a group of generic Women allows the play to be more about women with individual thoughts, feelings and desires, and still, those thoughts, feelings and desires remain political. The viewer realizes that even in the original Greek tragedies, the oikos and polis are not actually opposites but rather one and the same thing. Troy does not survive without the family, and the family dies with Troy.

As feminist theater scholar Sue-Ellen Case has argued, the women in the original Greek tragedies do not actually reflect the reality of women’s lives at the time. Rather, they are men in drag–male versions of womanhood. The real women of Attica were largely confined to the home; they were not allowed at direct-democracy assembly meetings, and might not even have been allowed to attend the theater. But they were allowed to play a public role in the religious life of the polis, leaving their homes to worship and to perform public rites and rituals around birth, marriage and death that only women were allowed to perform.

Clarke’s adaptation makes the hermaphroditic chorus a priest of the Earth Mother goddess Kybele. By placing the women of the play in a religious context, Clarke highlights the real importance of religion in the lives of classical women. At the same time, says Norman Frisch, a project specialist at the Villa,

Through this newly invented character, we get a far more precise impression of why the goddess-worshipping Trojans and their ‘feminized’ worldview are held in such contempt by the conquering Greeks, whose values are entirely patriarchal and religion solely Olympian. We understand more clearly why the Greek generals feel compelled to reduce Troy to cinders—not only in order to plunder its vast wealth, but also because they fear and despise its ‘degenerate’ and ‘effeminate’ culture.

Unfortunately, this does not entirely solve the problems of the sexism in the original. The matriarchal culture of the Trojans does not lead to women having political power or fulfilling lives outside of their families–though it does lead to a high valuing of motherhood. One does not imagine that these Trojan women ever lacked for childcare or help around the house. But, ultimately, their identities are so tied to their marriages and motherhood that, when those things are gone, nothing remains.

Helen also remains problematic. Perhaps as part of the effort to reflect the “sensibilities and souls of 21st-century individuals,” she is clad in a modern-day semi-transparent evening gown complete with sparkling jewels and high heels. This Helen speaks like an evil version of Elle Woods and uses her sexual power to control the men around her. Helen has always been problematic, and this production capitalizes on her history as a fetishized object with a more glamorous costume and more heightened acting style than the rest of the women. The male gaze of Menelaus is put on literal display, as the actor playing him sits center stage and looks lustfully at Helen while she talks. However, I wish that the show did more to interrupt the audience‘s gaze in order to remind us that even this contemporary version of Helen is not a real woman but rather a man’s idea of woman–and a metaphor for the power lust that drives men to war.

As an investigation of women in antiquity, women in Greek mythology and the idea of the personal being political, Trojan Women (after Euripides) is well worth a watch. Ellen Lauren’s powerful performance as matriarch-in-chief Hecuba is particularly refreshing in Los Angeles, where the arts scene is so dominated by Hollywood that few women speak as resonantly or move with as much strength as Lauren can. Director Anne Bogart’s touch is elegant as she orchestrates staging that ranges from stunningly still to boldly expansive, alternating the focus between the intimate personal experiences of the characters and the larger context of the dying city.

That modern writers and postmodern theater companies can adapt, add to, subtract from and stretch a classic like this and still have it mean so much is a testament to the writing of Homer (whose Iliad first recorded the Trojan myth) and Euripides. That it can also explore the issues of modern feminism is a testament to the artists behind the production.

Trojan Women (after Euripides) runs from September 8 to October 1 at the Barbara and Lawrence Fleischman Theater at the Getty Villa.