We Need Jobs and a Voice on the Job - Ms. Magazine
Skip to content 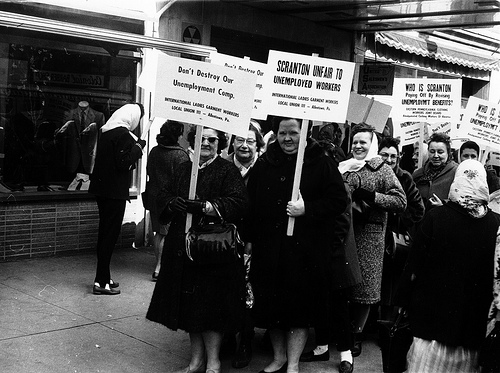 When I was in high school and college, I worked in restaurants. I worked for minimum wage and I worked hard—cleaning, cooking, even counting money and making bank deposits. I remember my pay going from $3.35 an hour to $3.45 an hour when I made ‘head cashier’—a job that carried a lot more responsibility than a 10 cent raise would imply.

My second year at UCLA, I got my first union job at a deli/restaurant in West Hollywood. There were some differences that I noticed immediately: grownups worked here, I had enough money to buy my family Christmas presents that year, and after a probationary period I was eligible for health benefits. But most striking of all was the absence of fear. I wasn’t used to working in kitchens where the line cook could talk to the boss when he didn’t agree with a decision. He didn’t always win, but at least he wasn’t afraid to speak up. This made a big impression on me and made me a life-long supporter of unions.

There are Conservative politicians like Wisconsin’s Governor Scott Walker and Representative Ben Quayle of Arizona who seem to be intent on doing away with this most basic right. Representative Quayle is even trying to block a recent NLRB decision that would require employers to post information about employees’ right to join a union. The poster essentially outlines the 1935 National Labor Relations Act stating that employees have the right to “act together to improve wages and working conditions, to form, join and assist a union, to bargain collectively with their employer, and to refrain from any of these activities.”

We are stronger together. This is a basic union principal and it is one that we can lose if we don’t get active in its defense. Unions have a proud history of empowering and mobilizing working people to vote. Many women leaders first found their voices in their unions. And unions have fought for legislation that improves jobs for all workers.

We need jobs. But I worry that the call for “jobs, jobs, jobs” doesn’t get specific enough. The only things that made those first jobs I had doable were the free bed and roof over my head at my parents’ house. How can women—many of whom are single parents or heads of households—work a minimum-wage/no-benefits job (or even two) and support themselves and their families?

We don’t just need jobs. We need jobs that pay a living wage and allow parents to support their families AND be there to nurture them. We need to maintain our right to use our voices, to act together to improve our lives. We need unions.

Jenya Cassidy is Editor of Labor Family News and directs organizational outreach for the Labor Project for Working Families.