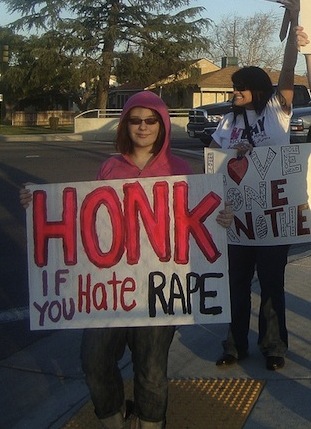 According to Facebook’s terms of service, users are not permitted to post content that is hateful, threatening or incites violence. But it appears that, in the minds of the Facebook powers-that-be, pages that encourage rape don’t violate that rule.

For two months now, Facebook users have been campaigning for the site to take down several “rape joke” pages. The titles of these pages include such gems as “Riding your girlfriend softly, cause you don’t want to wake her up” and “You know she’s playing hard to get when you’re chasing her down an alleyway.” Hundreds of Facebook users have reported the pages as Terms of Service violations, and a petition at Change.org (see below) demanding their removal has received over 130,000 signatures. But Facebook has yet to take action. Dozens of pages advocating rape or violence against women remain on the site, many with tens of thousands of fans.

The defenders of these pages say that we need to lighten up. Learn to take a joke. Feminists are, once again, being humorless. We are making mountains out of molehills when we become outraged by such trivial things as pro-rape Facebook pages.

According to statistics, 17.4 percent of women in the U.S. have survived a completed or attempted rape, and that figure would likely be higher if victims were not so often silent about their experiences. Yet we are not supposed to question what it means for us, as women, to live in a culture that dehumanizes us with acts of sexual assault (the vast majority of which are committed by men we know personally) and then dehumanizes us further by pointing and laughing at our victimization, belittling trauma with crude humor. This is the definition of rape culture: a society that upholds the conditions for sexual violence against women and treats this violence as an unchangeable norm.

Anyone who claims that a rape joke is just a joke does not understand how rape culture works. Just as racist jokes can only be found funny within a culture of racism, rape jokes could not exist outside of a culture of rape. When our society allows men to believe that having sex with a sleeping woman is not rape; that having sex with a girlfriend or previous sexual partner is never rape; that having sex with someone who is too intoxicated to consent or object is not rape; men are taught to feel entitled to these acts (and women are taught to accept them in silence). When our culture is casually permissive of sexual assault, it inevitably perpetuates more sexual assault.

It would be absurd, of course, to suggest that anyone goes out and commits assault as a direct reaction to a Facebook page. But in reducing sexual violence to nothing more than a joke, they reflect and perpetuate the idea that women are objects to be used for the sexual satisfaction of men. Countless seemingly small things work together to uphold that kind of pervasive misogyny.

It would be naïve to imagine that the removal of these pages will in and of itself end rape culture. But that doesn’t mean the appropriate response is to simply accept them. Daunting as the task may be, the only way to end rape culture is to confront it.

Facebook is certainly not responsible for the prevalence of sexual assault in our society. But those in a position of power at Facebook are responsible for the choice they make to either condone or condemn the use of sexual assault as humor. Silence, as the saying goes, is acceptance. And Facebook’s refusal to take sexual violence seriously is exactly the kind of complicit silence that rape culture thrives on.