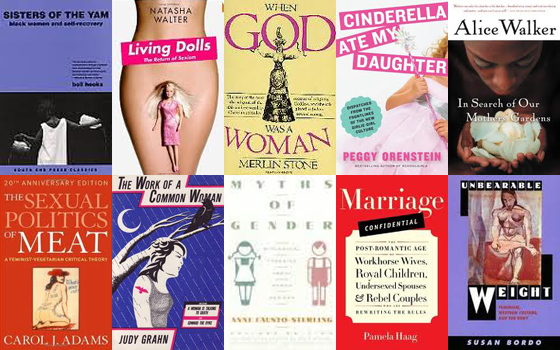 In this next batch of books, feminists consider the everyday: how we eat, shop, marry, parent and worship. Is there something sinister lurking behind a young girl’s love of the color pink? Is matrimony in the 21st century all it’s cracked up to be? Our chosen writers have a lot to reconsider, reframe and dismantle. And bell hooks makes her first (but not last!) appearance on the list.

90. Cinderella Ate My Daughter
by Peggy Orenstein
Harper, 2011
In her New York Times bestseller, Orenstein set out discover just how our pink and princess-crazed culture lures young girls and how she can keep it far, far away from her daughter, Daisy. What she discovers is that “just saying no” to pink isn’t as easy as it sounds. Find it here.

88. Marriage Confidential: The Post-Romantic Age of Workhorse Wives, Royal Children, Undersexed Spouses and Rebel Couples Who Are Rewriting the Rules
by Pamela Haag
Harper, 2011
Haag is real and raw in her take on marriage. USA Today calls Marriage Confidential “the rare book a divorced parent can read without feeling he or she has personally undermined Western civilization.” Find it here.

87. When God Was a Woman
by Merlin Stone
Mariner Books, 1978
In her defining history of goddess worship, Stone takes us on an archaeological journey and uncovers the ancient conspiracy that resulted in man’s rule over woman. Find it here.

86. Myths of Gender: Biological Theories About Women And Men
by Anne Fausto-Sterling
Basic Books, 1992
We know gender is constructed, but is biological sex real? Noted molecular biological and geneticist Fausto-Sterling says not, poking holes in any scientific or psychological “proof” of biological sex differences. Find it here.

84. Sisters of the Yam
by bell hooks
South End Press, 2005
Spoiler: This first appearance of bell hooks on our list will be far from the last (helped along by several votes for “anything by bell hooks”!) In Sisters of the Yam, hooks offers ways for black women to heal their own wounds and discover their strengths. Find it here.

83. Unbearable Weight
by Susan Bordo
University of California Press, 1993
Bordo argues that anorexia and bulimia follow logically from a culture that adulates the slender, fit body–as well as one defining femininity as passive and delicate. Find it here.

81. Living Dolls: The Return of Sexism
by Natasha Walter
Virago UK, 2011
Walter’s analysis of the 21st century anti-feminist backlash took England by storm. She explores the airbrushed, sexualized and gloss-over images of women today. Kathy Sheridan of The Irish Times called it “Required reading for everyone who cares about our humanity, and that means all of us.” Find it here.

Do you agree? Disagree? Any picks for what’s ahead? Let us know in the comments! Here’s your teaser for tomorrow: A book by a current Ms. editor will make an appearance.

How we did it (our pseudo-scientific methodology): After calling for nominations on September 9, 2011, we counted all reader picks that appeared on the Ms. Blog, Ms. Facebook page or Goodreads list before noon on September 25, 2011. To break ties, we went first by whether books got votes on multiple platforms, then by Goodreads rank. (Don’t be fooled by the current Goodreads order–thanks to all the other votes, the final list differs significantly.)