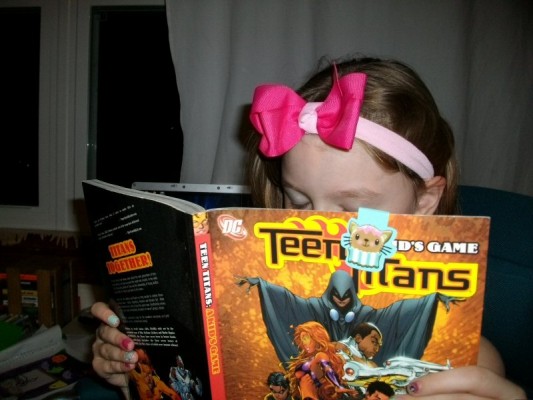 In response to your new Catwoman and Starfire comics, I’m not going to rant like Comics Alliance (though you need to read that) or Andrew Wheeler (also an excellent read) or Ms. Snarky (you may want to take notes on that one.)

Instead I’m going to hand over my forum and let someone else speak for me. Pay attention, DC. To the left is my 7-year old daughter.

And for good measure, below is my 7-year old daughter as she falls asleep most nights, reading. 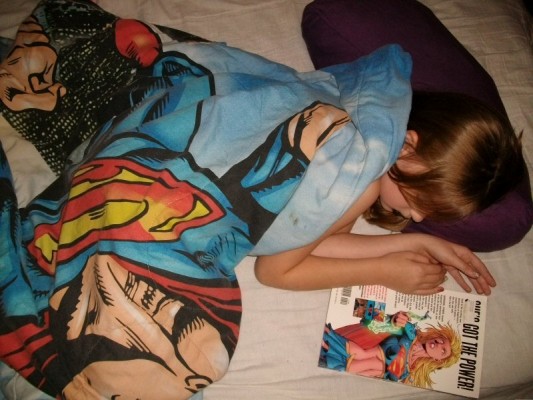 Both of the books she’s reading in the photos are yours, DC. And furthermore, she bought them both with HER money: her allowance, birthday and Christmas money. She gets at least one graphic novel and one book for major holidays. She buys superhero movies (we’ve managed to see all the major releases this year except Green Lantern and she’s loved them all.) She has a full-sized cardboard cut out of Spiderman guarding her bookshelf.

Most importantly? Starfire is her favorite hero.

So today I showed her your rebooted Starfire. She is not happy with you, DC. Here’s what she has to say.

She’s like me. She’s an alien new to the planet and maybe she doesn’t always say the right thing, or know the right thing to do. But she’s a good friend, and she helps people. She’s strong enough to fight the bad guys, even when they hurt her. Even her sister tried to kill her, but Starfire still fights for the good side. And she helps the other heroes, like Superboy and Robin and Raven.

She’s smart too. And sometimes she gets mad, but that’s okay because it’s okay to get mad when people are being mean. And she’s pretty. 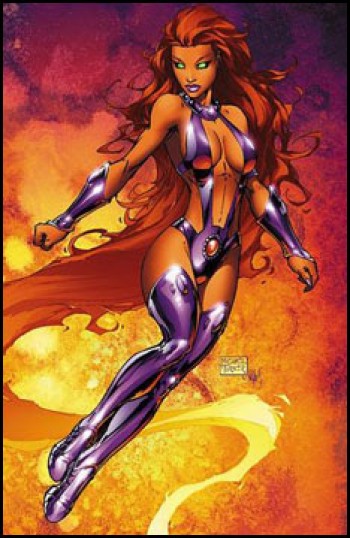 Well, she’s a grown up in that picture, not like in the Teen Titans cartoon, so if you’re a grown up and you want to wear something like that you can. It’s okay.

Tell me about the Starfire in the picture.

That’s where she’s starting the Teen Titans again. She’s helping the kids learn how to use their power and not be as sad because their friends died. She even protects them from grownups who want to tell them what to do.

Does that outfit make her pretty?

Well, no. It shows lots of her boobs though.

What does make her pretty?

What about this Starfire? What do you think about her? (Below, from DC’s just-released Red Hood and the Outlaws) 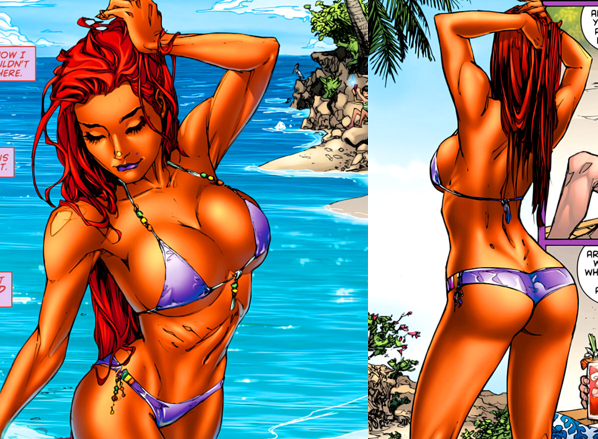 I can see almost all of her boobs.

Well she is on the beach in her bikini. But…

But, she’s not relaxing or swimming. She’s just posing a lot. [My daughter appears uncomfortable.]

Well, she’s not fighting anyone. And not talking to anyone really. She’s just almost naked and posing.

Do you think this Starfire is a good hero?

[immediately] Oh yes. She’s a great role model. She tells people they can be good friends and super powerful and fight for good.

Do you think the Starfire in the Teen Titans comic book is a good role model?

Yes, too. She’s still a good guy. Pretty, but she’s helping others all the time and saving people.

What about this new Starfire?

Because she’s not doing anything.

Is this new Starfire someone you’d want to be when you grow up?

[She gets uncomfortable again.] Not really. I mean, grown ups can wear what they want, but…she’s not doing anything but wearing a tiny bikini to get attention.

So, you know I’m going to put this on my blog right? [She nods.] Is there anything else you want to say?

I want her to be a hero, fighting things and be strong and helping people.

Because she’s what inspires me to be good.

See, it’s not about what they’re wearing, though that can influence things. What makes a hero is WHO they are, the choices they make and the things they do. If my 7-year-old can tell what you’ve done from looking at the pictures (there is no way I’m going to let her in on the whole emotionless random, amnesiac sex plot line) why can’t you see the problem here?

If this is your attempt at being edgy and reaching out the huge female comic audience out here, then I look forward to when this crap collapses around you so someone who gets it can take your place. We’re looking for good stories and great heroes. This just isn’t it.

Reprinted with permission from Michele Lee.

Photos of Michele’s daughter top left courtesy of Lee; photos of Starfire from DC Comics under fair use. All rights reserved.

Before she turned her sights to publishing Michele Lee was a stable hand, a sandwich artist and a PTA president. Now she's a reviewer, writer, editor and laid-off bookseller. Her stories have appeared in Dark Futures and Horror Library, and she's just sold her first novel, Wolf Heart. When she isn't staking a claim on publishing she's usually spending too much time on Facebook or blogging.