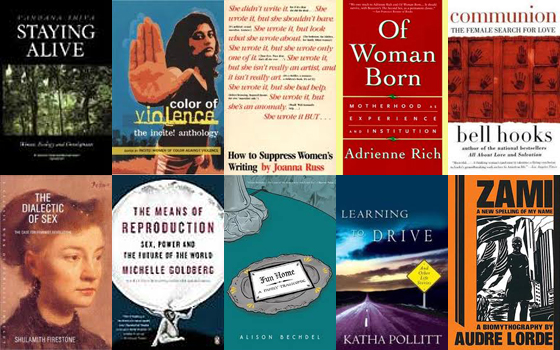 Within books 50 to 41, you’ll find several controversial takes on motherhood and many a memoir, including a reflection on the personal impact of breast cancer, a graphic autobiography from a dyke to watch out for and some gutsy revelations from a Nation columnist. You’ll also see a satire of how the patriarchy tries to dampen women’s creativity and another musing–this one on finding love–from list favorite bell hooks.

49. The Color of Violence: The Incite! Anthology
by INCITE! Women of Color Against Violence
South End Press, 2006
This collection of essays released by multiracial grassroots feminist organization INCITE! takes on violence against women, taking up the complicated questions of how domestic violence victims are further abused by the shelter system and how the criminal justice system often does a disservice to abused women of color. Find it here.

48. The Dialectic of Sex: The Case for Feminist Revolution
by Shulamith Firestone
William Morrow & Company, 1970
Firestone was 25 when she penned this now-classic call for revolution. It’s a must-read for anyone who wants to understand the spirit of the 1970s radical feminist movement. Find it here.

47. How to Suppress Women’s Writing
by Joanna Russ
University of Texas Press, 1983
Best known for her experimental science fiction, here Russ offers a guided tour through the many ways in which women and other minorities have been prohibited from creating written art. Find it here.

46. Staying Alive: Women, Ecology and Development
by Vandana Shiva
Zed Books, 1988
Taking her native India as an example of rural women’s historic role as keepers of the land, Shiva traces a multitude of interconnections: between women’s rights, environmentalism, sustainability, peace and development. Find it here.

45. Fun Home: A Family Tragicomic
by Alison Bechdel
Houghton Mifflin Harcourt, 2006
A graphic memoir by the author of the beloved alt-comic strip Dykes to Watch Out For, Fun Home is a literary and wry look at a childhood shadowed by a father’s closeted homosexuality. Find it here.

44. The Means of Reproduction: Sex, Power, and the Future of the World
by Michelle Goldberg
The Penguin Press, 2009
Combining in-depth cultural analysis and investigative reporting, New York Times bestselling author Goldberg covers the war on women’s reproductive rights as it is waged over four continents. Find it here.

43. Learning to Drive: And Other Life Stories
by Katha Pollitt
Random House, 2007
In these essays, the renowned Nation columnist turns her acerbic pen on her own life, finding both humor and profundity in topics such as a cheating boyfriend, learning to drive at 52, Marxist study groups and what life will be like after she has outlived all of the men who find her desirable. Find it here.

42. Of Woman Born: Motherhood as Experience and Institution
by Adrienne Rich
W. W. Norton & Co, 1976
In this lifechanging classic, the French theorist and poet provides dazzling insight into the meaning of motherhood. Find it here.

41. Zami: A New Spelling of My Name
by Audre Lorde
The Crossing Press, 1982
Lorde brings us a new breed of storytelling with this book, a biomythography, combining “the elements of biography and history of myth.” She explores the meaning of having multiple outsider statuses (Black, woman, lesbian). Find it here.