Troy Davis Is Gone, But the Struggle Goes On - Ms. Magazine
Skip to content 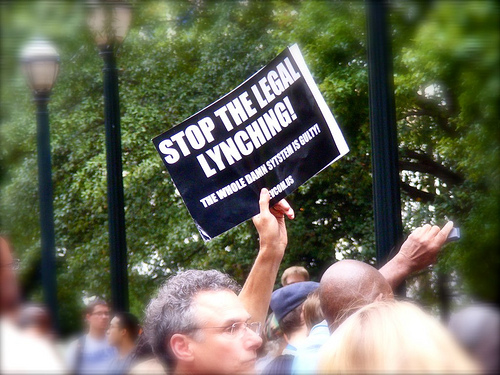 Like many, I was glued to Democracy Now’s live broadcast on the night of Wednesday, Sept. 21, from 6 p.m. until shortly after 11:08 p.m., the time that Troy Davis was killed by the state of Georgia, where I reside. Suddenly, the students’ essays that I was supposed to be grading or the dinner I was supposed to be eating lost their significance as I sat, in rapt attention, watching a tired and hungry-looking Amy Goodman reporting from the scene. I reflected upon the irony that the last time I was glued to a television/internet broadcast in which I felt like I absolutely could not go to bed until I knew the final outcome was on Election night 2008, when Barack Obama became the first black president of the United States of America.

Despite being well-schooled in historical legacies of the lynching of black men and the harsh realities of a racism that persists even in the face of “post-racialist” claims, somehow I thought this couldn’t be happening. Georgia couldn’t actually murder this man, with all the doubt, with the million petition signatures, with the worldwide outcry for compassion and justice. Sadly, some of the hopes of change and progress that I felt on that night in 2008 were dashed on Sept. 21, 2011.

I stepped away from Democracy Now to go to bed shortly after 10 p.m., but then I decided to check Facebook once more to see my friends’ status updates. That’s when I saw black lesbian feminist filmmaker Aishah Shahidah Simmons’ status, saying that the Supreme Court had denied the request for clemency. Troy Davis would indeed be legally lynched. I was shocked and appalled. My partner, a black man born in Georgia who shares the same birthday as Troy Davis, and I burst into tears. “It could have been me,” he said. Clearly, the phrase, “I am Troy Davis” resonates because people of color are painfully aware that, “there, but for the grace of God, go I.”

The next day was a three-class teaching day. How could I get in front of the classroom to teach about cultural anthropology the day after this “legal lynching” had occurred right in our backyard? How could I go on with business as usual and pretend this atrocity had not just taken place? The fact of the matter was that I couldn’t do it. I decided that it was necessary to create a space to allow myself and the students to express their grief, frustration and anger, even if it meant digressing from the class topics. The irony was that the Troy Davis execution actually did not veer from class topics at all. We were able to contextualize this tragedy in the context of watching a documentary that described anthropology’s contributions (both positive and negative) to early understandings of blackness and black culture. In my course on Cross-Cultural Perspectives on Gender and Sexuality, we had been discussing hegemonic constructions of black masculinity and how they lead to stereotypes of criminality. So in essence, the Troy Davis execution was a culmination of historical processes and racist legacies that have persisted, though often changing form like shape-shifters, over time.

Ultimately, my students thanked me for the opportunity to process this experience in a classroom setting. They poured out their thoughts, feelings and frustrations about Troy Davis’ execution, with little or no prompting from me. Several of them had traveled on a bus from the Atlanta University Center to the Georgia Diagnostic and Classification Prison in Jackson, Ga., and many expressed utter disbelief and a sense of feeling helpless and powerless in the face of injustice. How could the millions of petition signatures and the Herculean efforts to save this man’s life not have amounted in victory? As William Jelani Cobb, historian and professor at Rutgers University, described the crowd’s reaction at the scene of the execution:

here lies the paradox: even as people most intimately aware of the failings of this country, so many of us subscribed to a faith that justice would prevail that when we received word of the court’s refusal to grant a stay the reaction was stunned disbelief.”

For my students–women who have made a “choice to change the world,” as the college motto says–the execution of Troy Davis was difficult, if not impossible, to understand. The resounding questions were, Where do we go from here? How do we move forward? How do we maintain a belief in people’s power to effect change? How do we not let this brutal execution of a black man who many believe was innocent take away our ability to hope, believe and work towards a brighter future?

Perhaps we can find answers to those questions in the example that Troy Anthony Davis’ sisters, Martina Correia and Kimberly Davis, provide for us. They can show us how to keep hoping, believing and fighting. Correia has fought tirelessly to shed light on the doubts and inconsistencies in the case of her brother–who was convicted of the 1989 murder of off-duty police officer Mark MacPhail based on the testimony of nine witnesses, seven of whom since recanted and claimed to have been pressured by police to point to Davis as the murderer. She took up her brother’s cause in the midst of ten years of battling breast cancer. In one newspaper article, she said:

As you’d expect, what happened in that parking lot in Savannah 20 years ago has come to dominate my life. It was a tragedy for Mark Allen MacPhail’s family that a young man lost his life that way, but my brother has also had the best years of his life stolen from him. Back when I was a teenager I saw a pamphlet in a library about Amnesty’s human rights work overseas. I’d always been a ‘good causes’ kind of person and I became a supporter. This is one of the big ironies in my life. I thought I’d be helping prisoners of conscience in the Middle East or Africa, not campaigning for my own kid brother’s human rights.

Correia’s statement that she thought she would be supporting “good causes” on behalf of people in other countries rather than for her own brother speaks volumes to another issue we discussed in my classes: the irony that the U.S. likes to think of itself as a beacon of human rights and democracy in the world. The U.S. government likes to point the finger at other countries, criticizing human rights abuses and non-democratic traditions, while the U.S regularly violates the human rights of its citizens (and non-citizens). The U.S. is among the five countries that execute the most people in the world, a list that includes Pakistan, Iraq, China and Iran.

In her piece “The Execution of Troy Davis–A Mother’s Story,” Correia reflects on how her teenage son is also connecting the dots between the particular situation of his uncle and wider systemic issues:

My son is wise beyond his years. He’ll say, ‘My uncle is not the only one going through this type of pain … a lot of people really want someone to hear their case but they don’t have the power and resources.’ He knows that over 130 death row inmates have been exonerated, found innocent since 1973, demonstrating just how many innocent people are convicted and sentenced to death.

So the message is clear: Even though we lost Troy Davis, we must continue the fight for others like him. As Kimberly Davis said:

We’re going to carry on and continue to fight to bring down the death penalty. This fight didn’t start with him and it’s not going to end with him.”

University of Chicago scholar and activist Ruth Wilson Gilmore goes even further in her lecture entitled “Beyond the Prison Industrial Complex: The World We Want is the World We Need.” She pushes us to think beyond abolishing the death penalty to “prison abolition,” which Gilmore defines as

abolishing the world in which prisons are central. … [C]ampaigning for the end of only the harshest forms of punishment overlooks the root of the problem: the prison industrial complex, so-called because with more than 2.3 million people locked up, corrections now represents a multi-billion dollar industry.”

“I believe it works the way it’s supposed to work.”