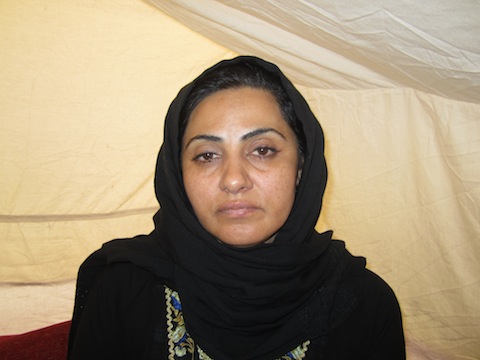 Today, Simin Barakzai reached her sixth consecutive day of a hunger strike to the death in a tent in front of the Afghan parliament building. [Update, Monday 10/10: On day nine, Barakzai is still refusing water or food and is in critical condition.]

Barakzai, a member of parliament from Herat, is camped out to protest her unseating from the parliament, along with eight other legislators, on accusations of voter fraud. Yesterday, doctors administered serum to keep her kidneys from failing.

The parliament has been in an uproar since a tribunal recommended the removal of 62 parliament members due to “electoral fraud.” The tribunal was appointed by President Karzai after his opposition gained an unexpected number of seats in the 2010 elections. Karzai, facing criticism at home and abroad, overruled its decision and returned authority in the matter to the Independent Election Commission, which eventually recommended the removal of just nine ministers–most of whom had no powerful connections to stand up for them. Barakzai is one of those nine.

Ms. writer Zareen Taj spoke in person with Barakzai on Wednesday. Here is the legislator’s message to American women:

America is losing life and money for this country; you are sending your sons and daughters to fight in Afghanistan. Why does your embassy join with government of Afghanistan to withdraw nine elected parliamentarians who have support of people and bring nine appointed people to replace us? I cannot believe democracy has become so meaningless for the politicians of America. My request for the women of America is to ask their government why this happened.

I was not a warlord. I had no money, and no power. I was just simple journalist, someone who felt pain of people, who loved the women of Afghanistan, children of Afghanistan and her country. That was the reason I entered in politics. I am not for political power. I just want justice.

I want women of America to see my situation. This is my life. This is the life of a member of parliament in Afghanistan.

Where are those women who claim that they are fighting for rights of women in Afghanistan? I request that the women of America ask their ambassador, If not this, what you are doing there in Afghanistan?

Photo of Simin Barakzai after four days of fasting, taken by the author.