A hypothesis with legs.

In the early 1990s, Arline Geronimus proposed a simple yet profound explanation for why Black women on average were having children at younger ages than White women, which she called the “weathering hypothesis.”

It goes like this: Racial inequality takes a cumulative toll on Black women, increasing the chance they will have health problems at younger ages. So, early childbearing might pose health risks for White women, but for Black women it makes more sense to start earlier — before their health declines. Although it’s hard to measure the motivations of people having children, her suggestion was that early childbearing reflected a combination of cumulative cultural wisdom and individual adaptation (for example, reacting to the health problems experienced by their 40-something mothers).

She showed the pattern nicely with data from Michigan in 1989, in which the percentage of first births that were “very low birthweight,” increased with the age of Black women, but decreased for White women, through their twenties: 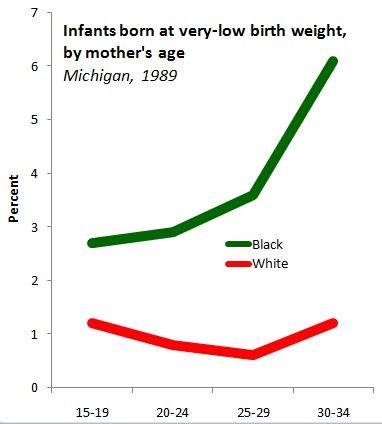 If the hypothesis is correct, she reasoned, the pattern would be stronger among poor women, who experience more health problems, which is also what she found.

The most recent national data, for 2007, continue to show Black women have their first children, on average, younger than White women: age 22.7 versus 26.0. And the infant mortality rates, by mothers’ age, also show the lowest risk for White women at older ages than for Black women: 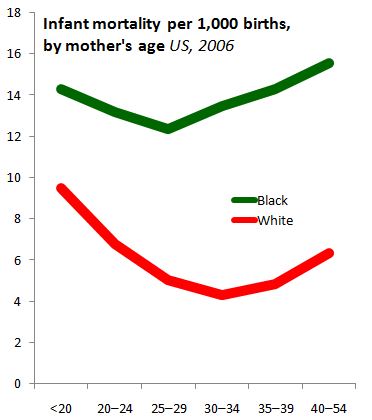 Source: My graph from CDC data.

Note that, for White women, mothers who have children in their early thirties face less than half the infant-mortality risk of those having children as teenagers. For Black women, waiting till their lowest-risk age — the late 20s — yields only a 14% reduction in infant mortality risk. So it looks like waiting is much more important for White women, at least as far as health conditions are concerned.

The implications are profound. If you base your perceptions on the White pattern, it makes sense to discourage early childbearing for health reasons. But if you look at the Black pattern, it becomes more important to try to improve health problems at early ages — and all the things that contribute to them — rather than (or in addition to) trying to delay first births.

This post originally appeared at Sociological Images, reprinted with permission.

Philip N. Cohen is a professor of sociology at the University of Maryland, College Park, where his research concerns inequality and families. He is at work on a family sociology textbook, and he writes the Family Inequality blog.