When the Rain Doesn't Fall in Nepal - Ms. Magazine
Skip to content 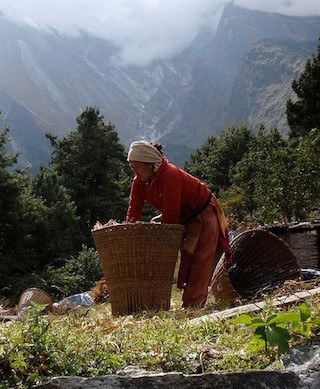 The consequences of climate change—floods, droughts, extreme weather, declining agricultural production—affect everyone. But in many developing countries, shifting temperature and precipitation patterns are making life especially hard for women and their families. A new documentary available online, Weathering Change, tells the stories of women around the world who are shouldering the burdens of climate change. Here is one such story:

Langtang region, Nepal—The photo is no bigger than a matchbook. In it, a man with stubble on his chin and a pink Nepalese hat on his head peers out from a simple white background. His eyes, tiny black dots, squint ever-so-slightly at the camera.

For months at a time, this is all Radhika Poudel sees of her husband.

They are not separated, or divorced. He isn’t a soldier deployed in a foreign war. But he’s gone all the same.

“The food from the farms was not enough for us to eat,” Radhika explains. “It was not possible to survive. Something had to be done. So, he started working outside (the village).”

Her husband usually comes home around June, when there is more work on the farm, and also in the winter, when it gets cold in Kathmandu and the work there dries up. Overall, she sees him for maybe four months out of the year.

“He does whatever he can get his hands on. Sometimes he goes with the trekking groups, sometimes he works as a porter and sometimes he works at construction sites as a laborer,” Radhika says. “Clearly, we miss him … but there is no income here. We can’t expect to earn anything by selling what we have grown.”

Radhika says it has been this way for the last four or five years, ever since the rainfall patterns in their rural farming village changed. While it used to rain reliably in April through June, now they never know when to plant, or what their harvest will yield. 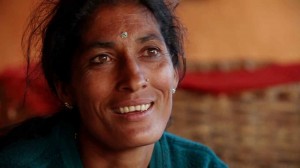 “Now, seeds die early,” she says. “The crops ripen before time. Because of the lack of rainfall, a few places are affected by drought. And the rainfall around September and October destroys what we have planted.”

In many of the poorest areas of the world, shifting precipitation patterns are already affecting agricultural production, with dire consequences for families and communities. The world’s growing population, which will surpass 7 billion people in October, is likely to magnify these challenges.

While they are lucky these days to get half of what they used to harvest, Radhika still maintains the farm to feed herself, her mother-in-law and her four children. Her days are long–feeding cattle, working the land, growing vegetables. She sees much of the same throughout her village, where other families have also been split apart by problems related to climate change.

“There are many families that have to struggle,” she says. “Many men have gone away to work as laborers. The women have to take the whole responsibility of the household and also look after the kids.”

Because of this, another change has also come to the village. Couples that used to want big families are now going to the health clinic and asking for contraceptives to limit the number of children they have. To Radhika, it makes sense in these tough times, when women are asked to do more, and often do it alone.

“There is a big difference between having a lot of children and only two,” she says. “It is fine to have no more than two children. Their future depends upon what they can do.”

When their reproductive health needs are met, women are healthier and have healthier children. Being able to choose to delay pregnancy also increases their prospects for completing school and accessing greater economic opportunities.

Radhika’s own children help her in the mornings and evenings, but she makes sure they attend school during the day, despite the extra burden it brings. An orphan herself, Radhika lived in poverty as a child, and married and had kids young. The village and the farm are all she has known. She wants their future to be different.

“If my children choose to stay here and continue on with the agriculture, there is no hope,” she says. “However, if they decide to study and go outside of here, then things might be different.

“I don’t know what is going to happen if I die. But as long as I’m alive, I want to make sure they don’t have to go through the hardships that I had to face.”

To hear more from Radhika and the other women featured in Weathering Change, visit www.weatheringchange.org.

Photo of woman working her field in Nepal from Flickr user John Pavelka under license from Creative Commons 2.0. Photo of Radhika Poudel by Nathan Golon.