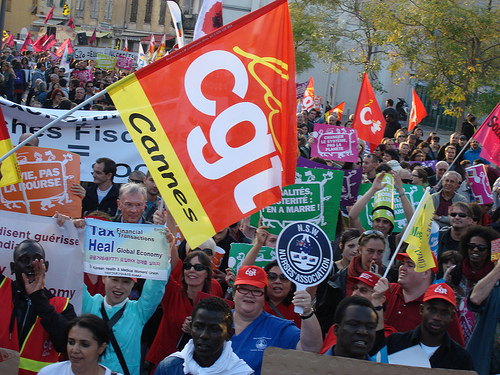 Nurses say they are fed up with seeing patients and communities strapped for cash and struggling to survive. So nurses’ unions around the globe are staging demonstrations today in favor of policies that promote economic justice.

National Nurses United (NNU) members will protest outside the Treasury Department in Washington, D.C. Joined by the AFL-CIO and Occupy D.C. protesters, the union is calling on the Obama administration to adopt a meaningful financial transaction tax to spur economic recovery. Calling this the “Robin Hood Tax,” supporters say that it will have a minuscule impact on ordinary investors while generating hundreds of billions in annual government revenue. Another expected benefit is to discourage the kind of high-frequency trading that led to the recent crash and to bloated profits for financial institutions. Sen. Tom Harkin (D-Iowa) and Rep. Peter DeFazio (D-Ore.) have announced they will introduce such a bill in their respective houses of Congress today.

We’ve been calling for a tax on Wall Street for several months now because our nurses are seeing on the job, each and every day in hospitals across the country patients who are suffering, patients who are in great need because they’re without a job and having to make a decision whether or not to buy food or pay for medicine, buy food or pay their rent. […] We’re here because it’s time that Wall Street gave back to this country.

Nurses will be demonstrating at three other locations around the globe. In France, at the opening of the G-20 summit, nurses from four continents will demonstrate in favor of a financial transaction tax as a means to revive the ailing global economy. And back in the states, two rallies are planned on the West Coast in solidarity with the day of action. In Los Angeles, nurses will march from the Occupy LA first aid tent through the downtown financial district. In San Francisco, nurses will convene at the Federal Reserve Bank for a march to the Wells Fargo headquarters.