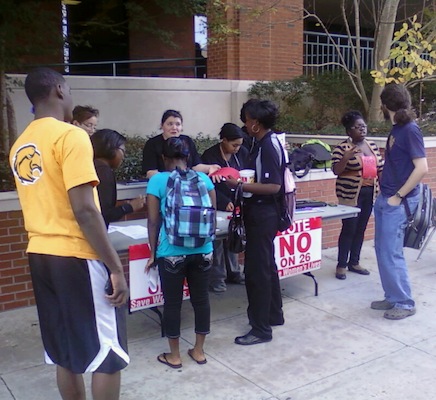 When I was asked to come to Mississippi about three weeks ago to organize students against Initiative 26, or the so-called “personhood” amendment, I honestly did not know if we even had a chance of winning. The amendment could have made abortion illegal and banned hormonal birth control, including the Pill. Because Mississippi, the bedrock of the Bible Belt, has a deep-rooted history of racism, sexism and classism, I knew it would be an uphill battle to mobilize students quickly against this initiative. That being said, I was pleasantly surprised by the overwhelming outrage students expressed when they learned about the implications of Initiative 26.

I helped organize students at Historically Black Colleges and Universities (HBCUs) in Mississippi, including Jackson State University, Alcorn State University and Tougaloo College. When I did my first classroom announcement at Jackson State about Initiative 26, students were outraged about how this initiative could affect access the Pill, and they volunteered to get involved and spread the message to their peers and classmates. Though the majority of students on campuses across the state were barely familiar with the initiative when I and other Feminist Majority Foundation organizers arrived, it did not take long for students to realize that their rights to the the Pill, IUDs and emergency contraceptives could be at stake if 26 passed.

Students at Tougaloo held forums and a rally against 26; student organizers at Jackson State handed out flyers, educated their peers and mobilized at the “Hot Spot” for a Rock the Vote rally; Alcorn students proudly displayed “Vote NO on 26″ signs on the windshields of their cars. It was inspiring to see both women and men energized and participating in grassroots organizing on their campuses around what is not only a state issue, but also a national issue concerning reproductive rights.

Most of the students I worked with were African American and they understood how greatly family planning services are needed in the African American community in Mississippi. African Americans in Mississippi make up a third of the population and many live below the poverty line. When I visited a campus in Cleveland, Miss., I had breakfast in what was clearly “the black part of town.” I had a conversation with our server, a woman, about my age and what I was doing in Cleveland. She told me that she has five children and that the only reason why she has so many is that she could not consistently afford birth control. She also said that if Mississippi were to take away the pill, she does not know what she would do.

The students that I worked with knew many of these same stories and knew that if the pill and abortions were to become illegal it would leave many poor families, particularly poor black families, in a cycle of poverty. They knew the history of Mississippi and how government had taken away their rights and their ancestor’s rights in the past. With this, they stood together, talked to their families and friends, organized their campuses and helped defeat 26.

I am so proud and honored to have worked with the students that I met! They put in a ton of hard work and were right there with me to defend Roe in Mississippi.

Photo of organizers in Mississippi by the Feminist Majority Foundation

Francesca graduated from Miami University in 2010 with a B.A. in Journalism, Black World Studies, with a minor in Political Science. She worked as an Ambassador for the Miami University Women’s Center. While there she was a writer and editor of the semester newsletter titled The Femellectual, planned and coordinated the annual Women of Color Celebration, and organized events around issues concerning domestic violence, body image, and women of color on Miami’s campus. In addition, she served in other campus activist organizations such as the Miami University’s National Association for the Advancement of Color People (NAACP) as the Membership Chair, where she played an active role in organizing and recruiting students for membership with the chapter. Francesca organizes campuses in the Mid-Atlantic region & Historically Black Colleges and Universities.