Everyone Has the Right to Occupy Space, Safely - Ms. Magazine
Skip to content 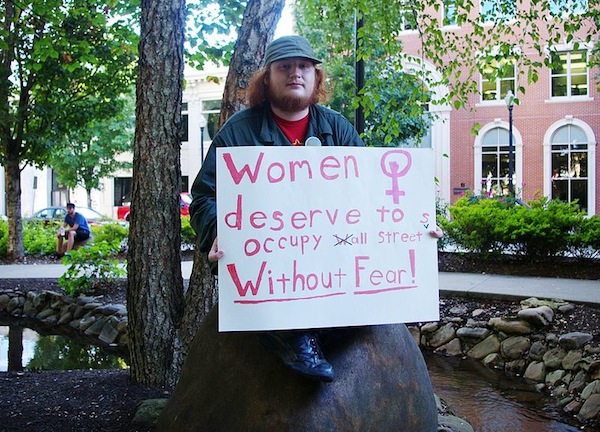 One inadvertent effect of the Occupy movement has been to call attention to the fact that public space is not always safe space for women, nor for queer and trans people. Fittingly, anti-street-harassment group Hollaback! has stepped up to tackle the issue of sexual violence at Occupy. In a official statement written collectively with Occupied Wall Street Journal and OccupyWallSt.org, Hollaback! is calling on all of the general assemblies of the Occupy movement to adopt an anti-harassment and anti-assault platform to ensure that occupied space is both inclusive and safe. Ms. is proud to cosign this statement, published on OccupyWallStreet.org:

For as long as public space has existed, women and LGBTQ people have been trying to “occupy” it safely–with distressingly little success. Harassing comments, groping, flashing and assault are a daily, global reality for women and LGBTQ individuals. Too often, these injustices are met with little or no response, regarded simply as “the price you pay” for being female, trans, or gay in public. As supporters of the Occupy movement, we believe that a world where everyone has the right to occupy public space safely is not only possible–it is essential to building a strong and lasting movement.

It’s no secret that the Wall Street 1 percent who wrecked our economy are disproportionately straight and male, despite countless studies showing the less organizations look like the 99%, the less effective they are. As we quicken the pace of social change, we must be careful not to replicate Wall Street’s mistakes. The message is clear: equality means impact.

But for women and LGBTQ people to participate equally in the Occupy movement, we must be safe in occupied spaces. We know that harassment and assault happens everywhere–and that the Occupy movement is no more immune to it than our nation’s parks and parking lots–but we also know that a movement where women and LGBTQ individuals are not safe is not a movement that serves the interests of the 99 percent.

In solidarity with those who are already working on the ground to make safer spaces, we call on all General Assemblies of the Occupy movement to adopt anti-harassment and anti-assault as core principles of solidarity. To realize these principles within the movement, we call on General Assemblies in every city to empower women and LGBTQ occupiers with the time, space, and resources necessary to ensure that every occupied space is a safe space.

Photo from Wikimedia Commons of a protester at Krutch Park in Knoxville, Tenn. on October 7, 2011, with a sign reading “Women deserve to occupy (W) all Street(s) without fear.”