Benjamin B. alerted us to a New York Times story about a new trend in Japan: yaeba. Some young Japanese women are now having dentists artificially enlarge their incisors so as to achieve a look associated with a small mouth crowded with teeth: 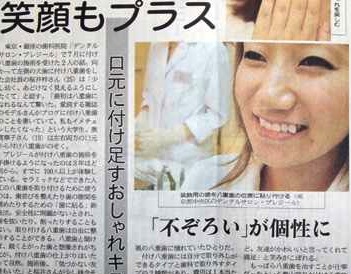 Here’s some dental work to that effect, borrowed from the “after” pictures on a dentist’s website:

Michelle Phan, who blogged about the trend, explained:

It’s not like here, where perfect, straight, picket-fence teeth are considered beautiful. In Japan, in fact, crooked teeth are actually endearing, and it shows that a girl is not perfect. And, in a way, men find that more approachable than someone who is too overly perfect.

Communication Studies professor Dr. Emilie Zaslow had something different to say.  She argued that the trend represented a fixation with youth, the sexualization of girls, and pressure on women to infantilize themselves:

…the naturally occurring yaeba is because of delayed baby teeth, or a mouth that’s too small.

In other words, having a crowded mouth makes you look younger, like a girl instead of a woman. Now, it’s easy to judge Japan as being weird and sexually-suspect, but we have practices with exactly the same effect here in the U.S. Consider the preponderance of bleach blonde hair in America. It’s a natural hair color in some children, very rare in adulthood, and adopted mostly by adult women, not men. Let’s add baby doll dresses and shaving our pubes to the list.

Constitutional Rights for the “Unborn” Would Force Women to Forfeit Theirs
“Care is Infrastructure, Silly”: Feminists Defend Caregiving Funding in Biden’s Jobs Plan
Table for 12, Please: Shalanda Young, Acting Director of Office of Management and Budget