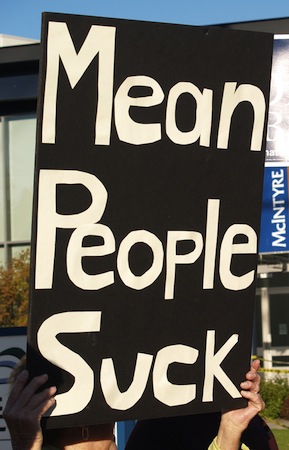 In an ongoing student battle against a hate-filled tabloid, The Koala, that has been causing uproar on three Cal State campuses since January, Cal State San Marcos students have now filed a Title IX complaint with the university.

In addition to aggressively handing out their publication by shoving it in students’ faces, “Koalans” also make it available online. Typical content in the privately-owned tabloid are “top ten” lists such as “Top Ten Breakup Lines To Use On A Girl You Kidnapped.” It has progressed over the months from general “rape jokes,” racist slurs and homophobic remarks to specifically naming and targeting individual students. The most recent edition includes a photo of a women’s studies student Photoshopped onto a pornographic image, along with the suggestion that another student activist jump off the campus parking structure.

Students filed the Title IX complaint after receiving no university response to a recent letter, signed by hundreds of students and faculty, demanding that the community be protected from the hostile environment created by the Koala. Despite local news media coverage of the issue, a petition at Change.org with over 700 signatures, and direct complaints from many students and faculty, the university has maintained its stance that The Koala is protected speech.

“Officials at CSUSM have enabled the severe and pervasive harassment of women and other classes of students targeted for such harassment by The Koala,” says Professor Wendy Murphy, a Title IX expert who is assisting the students with their complaint. She explains:

It is clear that the harassment of students…is a form of discrimination prohibited by the statutes enforced by the Office for Civil Rights. The presence of The Koala at Cal State San Marcos has created an environment that any reasonable person would find intimidating, hostile and offensive, and this environment is limiting the Cal State students’ ability to participate in and benefit from educational programs. The university is bound by federal law to provide a prompt and effective response on behalf of victimized students and the integrity of the academic environment as a whole.

The administration has released a number of statements about dedication to “diversity” and “civility,” but has failed to condemn the publication directly or to try to limit its distribution on campus.

However, a number of undaunted students are working to create a social justice action team, have launched a social justice blog (which can be viewed here), and are working to spread the word about The Koala to the media. These efforts resulted in a story at Jezebel, at San Diego ABC news, and at the San Diego North County Times. Here’s hoping that those being paid exorbitant amounts of money to uphold the mission statement of CSUSM–a statement that emphasizes a commitment to diversity and civility–will finally do something.

To voice your support, you can sign this Change.org petition.