You, Too, Can Be a Queer Parent - Ms. Magazine
Skip to content 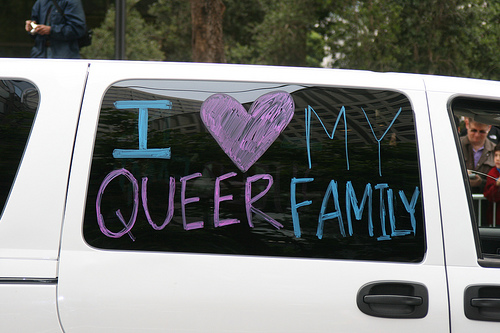 “Do you have to use that word?” My mother made a face that looked slightly ill. Despite being a bit insulted, I feel compassion for her plight. I know my mother loves me, but she hates the word “queer,” and really wishes I could be a little less odd, too.

“What word? Queer?” She nodded and her face looked like she was holding back a heartburn belch.

“It’s just so crude. And unkind. People think unkind things when they say that.”

That can be true. And people think unkind things when they don’t say that–and sometimes, people make unkind comments and policies, regardless of whether they ever articulate a word like “queer.”

I understand what my mother’s saying though. The word “queer” has been used as an insult–the kind of thing a person says as he’s kicking in your teeth. It could be hard to hear something like that said of your child–even if your child’s the one saying it. I get it. And she’s not re-claimed the word as I have. Not only does using the word positively deprive it of its negative power, I think it’s accurate. I am odd–and not just in my sexual orientation. Queerness is defined relative to the way things are usually done–and sometimes difference is cause for celebration. I am queer, and the family I’ve created is queer too. Indeed, I hereby extend an invitation for you to engage in queer parenting. (See, it’s true what the homophobes fear: I am here to recruit you.)

Let’s be clear though, lest my broadened definition of queer parenting–as anything unusual–fails at clarity. I am a woman who creates romantic partnerships with those who are anatomically similar. I have one son who’s in college (and because you might be curious, he romances the ladies) and my son’s father has been “married” to a man for more than a decade. (I use “married” in quotes because the stability of his relationship still affords him none of the thousand-plus privileges currently offered to hetero-relationships in our nation.)

I am indeed concerned with the specifics of making a family and raising children, as a queer–meaning homosexual–parent. I’m also very aware that sexual orientation is not always the queerest thing about my family.

Have you noticed how it’s easier for some people to accept gayness if it looks like a traditional monogamous marriage focused on children and a mortgage? It’s ironic not to be able to marry, because really, when gay people marry, they don’t seem nearly as scary. We also don’t seem as fearsome when we’re gender-normative – when the men look manly and the women look feminine. And privilege comes with not looking scary. The less queer we seem, the easier it is to move through the world and not experience discrimination. Do you notice how that’s true with a variety of forms of not fitting in?

And does that mean that we should always teach our children to take the path of least resistance? My (hetero) friend once asked me if I was relieved that my son is heterosexual–he’ll experience less discrimination that way, after all. Of course I don’t like the idea of him ever being harmed, and I think this question puts the focus in the wrong place. We NEED difference–and we need to learn how to be more respectful and appreciative of various ways of living too.

In my experience, gender difference is often the bigger act of queerness than just being gay. I’m a feminine woman–all is well and seems normal in my gender expression. And yet, the women I date tend to be masculine women–and I don’t mean Ellen DeGeneres masculine. I mean k.d. lang masculine, and then some. (Although, check out k.d.’s newest music video. Now we’re talkin’.) And then there are all of the other ways my family’s queer. Like, we didn’t let our son watch a lot of television when he was small. And we value extended, non-blood-related family. My son didn’t spend a lot of time in daycare or after school programs–when he was seven, I arranged my work schedule to be home for him after school. Unless I was traveling. See, we also travel a lot and he did an independent study program in high school so he could have a broader range of experiences. We eat organic food and we take up our civic duty by writing and speaking and demonstrating and boycotting in order to shape our social world.

We’re a QUEER family. Being gay is just part of it. It’s how we are gay–and everything else. Do I want my son to be hurt by that? Of course not. And I don’t want conformity to every mindless trend to diminish the brilliance of his life either. Here’s the thing: We try to be as clear and up front about who we are in the world as possible. I strive to take responsibility for the privileges I have, and to confront the oppressions I endure. So far, my son impresses the heck outta me with his ability to take responsibility for his life–and his ability affect the world around him. We all have a responsibility to create a caring and respectful culture; maybe being queer has made that a little clearer.

My mother may continue to cringe at the word “queer.”’ And, I invite you to consider the idea that queerness can be a pretty good thing. It may be difficult to be different, and it can be really worthwhile. In the broad sense of the word–every person who has ever gone against social norms and values in order to improve them is queer. Anyone who persists despite disapproval, who considers consequences before buying, who loves when hate prevails, who fails to exclude others due to popular judgment–anyone who builds family consciously–is queer. Gandhi was queer; Buckminster Fuller was queer; Bob Marley was queer. It’s okay to be odd. Really.

It is my pleasure to offer stories and commentary on queer parenting, in the particular sense of how sexual orientation and gender variance affect families. And I also invite you to consider what it means to encourage difference when it arises in your children, and in yourselves. In a world that values and rewards conformity, we need more models for uniqueness and compassion. Go ahead. Be as queer as you need to be–at least until “queer” becomes a respectable way to live.