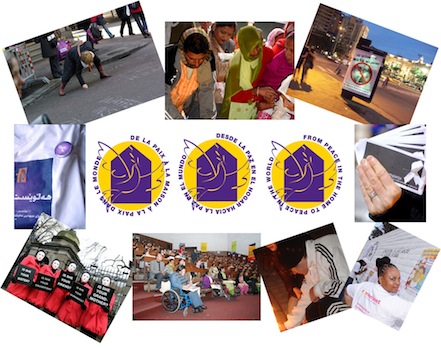 On Thanksgiving week, we typically look forward to events that involve food. And sales. And hopefully sales on food. However, this year, Black Friday shares a date with a nobler cause: International Day Against Violence Against Women. You can start celebrating by committing no violence over the last 15-dollar Blu-Ray player or microwaveable side dish that’s passable as homemade, but don’t stop there–you have a veritable feast of ways to show your love and support for women worldwide!

Global: November 25, also known as International Day Against Violence Against Women, marks the beginning of the annual 16 Days of Activism Against Gender Violence, which ends on Dec. 10, International Human Rights Day. During these 16 days, individuals and groups around the world rally for the elimination of all forms of violence against women. This year’s theme is “From Peace in the Home to Peace in the World: Let’s Challenge Militarism and End Violence Against Women!” Here’s a selection of kick-off events on Friday, November 25:

To find 16 Days of Activism Against Gender Violence events in your area, check out this events calendar!

London: The Reclaim the Night 2011 march and rally will take place Saturday, November 26th, in central London. The London Reclaim the Night marches have turned out thousands in the past few years, helped along by their inclusivity–this year’s invite reads:

All women are welcome at Reclaim the Night, including: women of all colours and cultures, of all religions or none, women of any age, disabled and non-disabled women, heterosexual women, lesbians, trans women, bisexual women, refugee and asylum-seeking women and any other women you can think of! We would love to see you all there. Bring along your mothers, grandmothers, sisters, aunts, nieces, and daughters. Join us for the rally after the march too.

Photo via 16 Days of Action Against Gender Violence Campaign, Rutgers School of Arts and Sciences Center for Women’s Global Leadership