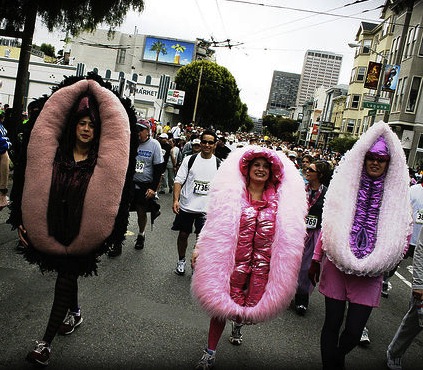 A few weeks ago, New York Times Magazine carried an amazing article–Teaching Good Sex—that uses a Philadelphia private school’s approach to sex ed to illustrate a simple but controversial question: What if we actually taught young people about pleasure, orgasms, healthy relationships and the wide variety of what is normal in both sexual desire and physical appearance?

I want to highlight one specific issue raised in the article—the lack of awareness among high school students about what women’s genitalia look like. While there has been little fanfare about the elective class so far, its instructor, Al Vernacchio, a well-liked and respected sex scholar who also teaches English at the school, notes that some lessons do draw more attention than others:

The lessons that tend to raise eyebrows outside the school, according to Vernacchio, are a medical research video he shows of a woman ejaculating—students are allowed to excuse themselves if they prefer not to watch—and a couple of dozen up-close photographs of vulvas and penises. The photos, Vernacchio said, are intended to show his charges the broad range of what’s out there. “It’s really a process of desensitizing them to what real genitals look like so they’ll be less freaked out by their own and, one day, their partner’s,” he said. What’s interesting, he added, is that both the boys and girls receive the photographs of the penises rather placidly but often insist that the vulvas don’t look “normal.” “They have no point of reference for what a normal, healthy vulva looks like, even their own,” Vernacchio said.

One female student remarked that when the class covered a biology unit, she was surprised she knew quite a bit about the opposite sex: “I probably would’ve been able to label just as many of the boys’ body parts as the girls’, which is sad. I mean, you should know about the names of your own body.”

Compounding the problem of a lack of education is that many students are relying on the most readily accessible photos of women’s naked bodies—media-distorted images and online pornography—and these images don’t exactly promote a realistic view.

I recall that my own sex education experiences involved uniform line drawings of healthy genitals and graphic photos of STI-affected genitals, but nothing visual, and especially not photographs, to indicate that there really is a wide range of what healthy genitalia look like. At Our Bodies Ourselves, we have a long history of encouraging people to grab a mirror and take a look at their own genitals, advice that shows up from the earliest to the most recent editions. Another good resource about women’s genitals is this article over at Scarleteen, which talks realistically about normal variation in size, shape, and color.

Meanwhile, there’s a petition at SignOn.org calling for better tracking of cosmetic genital surgery. The petition also wants surgeons who offer these services to “provide full information on genital diversity” when working with women who have concerns about the appearance of their genitals. “Without this information, women cannot make an informed choice,” the petition reads. It continues:

Most surgeons’ websites are loaded with photographs that misinform the public about female genital diversity. The “before” photos in the before-and-after online photo galleries depict a range of genitals as abnormal, but scientific studies show that many different shapes, sizes, and colors are normal. The photo galleries not only misinform, but they increase women’s and girls’ self-consciousness and add to anxiety. Photos may even be photoshopped or retouched.

This is a topic Heather Corinna also covers in the Scarleteen article, explaining that while some women do have physical discomfort or other medical reasons for wanting genital surgery, “for the most part, for nearly all women, your labia ARE normal, however much they vary. Beauty—as ever—remains in the eye of the beholder.”

That’s a lesson all students could benefit from.

Reposted from Our Bodies, Our Blog

Rachel is a medical librarian, with a Masters of Library and Information Science, providing clinical evidence summaries to inform care at an academic medical center. She began writing the blog Women's Health News in 2005, covering policy, research, news, and online resources. Rachel has also written for and served on the editorial board of a medical librarianship journal, and previously worked in communications and tech support for a non-profit organization.