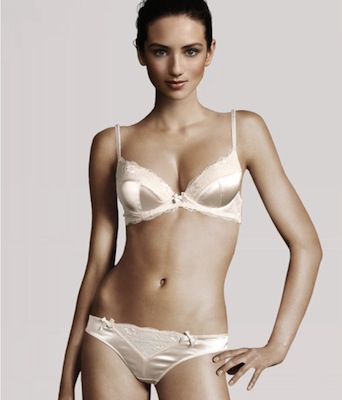 I hope that years from now we’ll look back and laugh at the time when female clothing models were all expected to conform to a very narrow and specific range of body types. If so, we’ve got our punchline. This week, H&M has pushed this trend to the point of absurdity: Instead of accepting minor variances in body type, the Swedish fashion outlet has decided on a single, specific, computer-generated body. From New York Magazine:

The models fronting H&M’s new holiday lingerie campaign are unreal, literally. Jezebel translated an article from Swedish newspaper Aftonbladet in which H&M press officer Håcan Andersson confirms that their new lingerie-clad bodies are “completely virtual.” For H&M’s website or catalogues, much of the store’s clothing is now shot on mannequins, which are then humanized via photo-editing software — which explains the eerily uniform pose now increasingly commonplace online.

H&M also shot real models for the campaign, but only to superimpose their heads on the standard body form. Aptly, H&M calls them “facial models,” who are apparently aware of their abridged role in the finished catalogue shots. The form, which is also the base used at online styling studio Looklet.com, is then edited some more to sync with differing skin tones, and even for the addition of subtle detail, like a spattering of freckles. 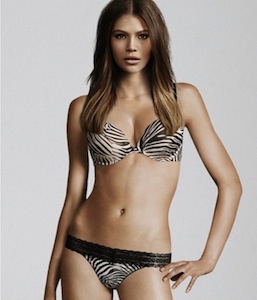 An H&M spokesperson insists that they only settled on a single “default” body because they wanted a standard base on which to display the clothing. But that doesn’t make the effect any less unsettling. Check out the images in the Jezebel write-up. How weird is it that they Photoshopped skin tone in order to approximate racial diversity, but insisted on the same stick-limbed body for each model? Regardless of whether or not these images are supposed to show the “perfect body,” as H&M denies, the company still chose it as the default. Do they think their median customer exercises for four hours a day and subsists on a diet of kale and Perrier?

The face-swapping is what truly brings us into the uncanny valley, though. It’s emblematic of a very strange trope in fashion and advertising, in which women are treated as little more than composites of various body parts that can either be isolated and displayed on their own or (as we see here) reassembled into new and alien Frankenmodels. Mere humans need not apply.

Sign here to urge H&M to use real women to model its clothes: