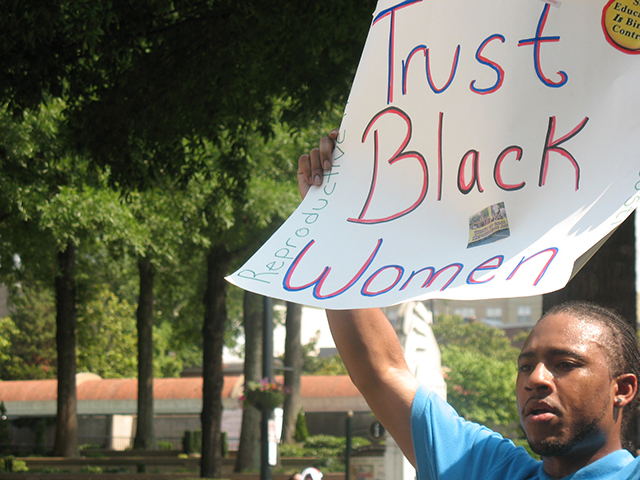 I’m writing today to ask my fellow women of color reproductive justice activists and our allies to take a united stand against the Susan B. Anthony and Frederick Douglass Prenatal Nondiscrimination Act (PRENDA), a race- and sex-specific anti-abortion bill that went before the House Judiciary Subcommittee on the Constitution today. I cannot repeat enough times the urgency of moving quickly to act in solidarity.

This is a federal version of legislation that a coalition of women-of-color organizations defeated at the local level in Georgia. It attempts to restrict women of color’s access to abortion and prenatal care in the name of “civil rights.” This bill seeks to protect “unborn Americans” by banning race- and sex-selection abortions. However, the argument that fetuses must be protected from the women of color relies on racist stereotypes about entire communities:

This is patently untrue. Black and Asian/Pacific Islander women have consistently fought for the right to make their own decisions about if and when they will have children based on the support networks and resources that are available in their communities. This bill attempts to drive another wedge between women and their reproductive health practitioners. It will exacerbate many of the existing structural barriers that we women of color must overcome in order to access reproductive healthcare. It will put pressure on abortion-care providers to conduct racial profiling on us, requiring them to secondguess our motivations in seeking abortions. It will do nothing to address the entrenched disparities that low-income women of color must navigate every day in seeking reproductive care. It will not contribute to grassroots-level change in Asian communities where we are already working to address the sexist roots of son preference.

This bill has been put forward by members of Congress who consistently vote to decimate funding for reproductive health services and family support programs. This bill is backed by the same anti-abortion group that put out racist billboard campaigns targeting Black communities.

This bill would result in increased scrutiny of the reproductive decision-making of Black, Latina, and Asian/Pacific Islander women. It is an affront our rights to privacy, to bodily autonomy, and to mobilize in concert to create change and solidarity in our communities—based on our priorities and experiences, our visions for the future and our agency.

Click here to contact your Congressperson to tell them that you strongly oppose this racist and anti-woman legislation.

My thanks for the information and advocacy of the National Asian Pacific American Women’s Forum, Trust Black Women, the Leadership Conference on Civil and Human Rights and the grassroots activism of SisterSong NYC, as well as those unidentified warriors whose words and wisdom I am drawing on for this post.

Excerpted with permission from The Abortion Gang.

Rachel Kwan is a twentysomething Asian-Canadian feminist, student, sister, daughter. She has traveled widely in Europe, Canada and the US, always seeking to build connections with women who seek a better world. Her interest in feminism(s) is rooted in engagement with reproductive justice and sex work activists/activism, numerous conversations with amazing political people, and more likely than not, her mother's choice to buy her Lego rather than dolls.