Afghan Woman Jailed for Her Rape Has Been Freed-But May Still Marry Her Rapist - Ms. Magazine
Skip to content 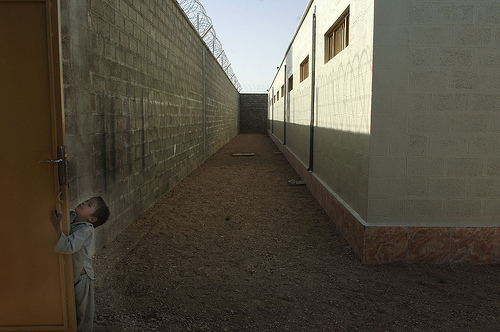 It’s a scene straight out of Old Testament: A 20-year-old woman who was raped by her cousin’s husband may now marry her rapist. The woman, known only as Gulnaz, reported the rape to local authorities more than two years ago, but instead of finding justice, she found herself in a prison cell, sentenced to 12 years for adultery. Behind bars, she bore the daughter of her rapist, and she has been raising her in a jail that contains more than 100 other women, some with children.

On Thursday, Afghan President Hamid Karzai finally pardoned and released Gulnaz after her attorney presented him with more than 4,000 signatures (a number that has since grown) in support of clemency. While early reports said that marrying her rapist was a condition of her release, Gulnaz’s attorney, Kimberley Motley, says the pardon had no strings attached. But Gulnaz is considering marrying her rapist anyway. Despite her legal freedom, she must now handle the crippling social stigma that young single mothers and illegitimate children in Afghanistan face.

“When you register in any sort of institution or government body, the first question after what is your name is what is your father’s name. It defines your identity and place in this Afghan world,” says Leslie Knott, who has spent seven years in Afghanistan and produced the documentary “In-Justice: The Story of Afghan Women in Jail,” profiling Gulnaz and two other women imprisoned for moral crimes. The documentary was controversially banned by the European Union.

Gulnaz received visits from officials from the Supreme Court, the Ministry of Justice, and the presidential palace. Gulnaz’s attorney was not included in these conversations, despite being at the jail and available when they took place, which she calls “absurd.” Both she and Knott suspect Gulnaz was urged by officials to agree to the marriage and may even understand it as an either/or deal for her freedom. Motley says:

She’s very overwhelmed. She’s an uneducated, illiterate 20-year-old Afghan woman. In the last week she’s had visits from the highest level government officials. I think she definitely feels pressured. Every official who has talked to her about whether she chooses to marry the guy has not freely asked her—they sort of told her it’s in her best interest.

Afghan women are extremely extremely strong. They can suffer through anything. Gulnaz said to me that her biggest concern right now is her daughter. She just wanted to have a father for her daughter and peace in her family.

Despite this grim prospect, Knott says that Gulnaz has been energized by the support for her case:

She has a lot of light in her eyes; she’s in much better spirits than when I’ve seen her before. She was almost glowing with the fact that people care about what’s happened to her. What we’re hoping is that she is going to be released in the next 4-5 days into a very safe anonymous place where she’ll have a bit of time to figure out what she wants to do and realize there are people out in the world interested in helping her.

In the meantime, her rapist still has five years to serve on his adultery charge and the two families are locked in a stalemate over a condition of the wedding: Gulnaz’s brothers have demanded a daughter of the rapist be given to them as a revenge payment known as baad.

“It would be reassuring to be able to see this as one bizarre, extreme case gone wrong, but Gulnaz’s case is pretty typical of the 350 women who are in prison for moral crimes,” says Heather Barr, the Afghanistan researcher for Human Rights Watch who has been interviewing women imprisoned for moral crimes.

So it would be a mistake to think: She was pardoned. Super. Let’s move on. This is just one example. It’s not only about the 350 women that are affected by these policies; the fact that these women end up in prison also sends a message to all Afghan women that if you are being forced into a marriage, if you are being beaten or sexually assaulted, don’t think of going to look for help.

“Access to justice for Afghans all around the country is a critical question that really does have yet to be addressed. It has been given lip service, but has not really been put into practice. A justice code where women who are victimized by rape and then get penalized for the crime shows us there is still a long way to go,” says Gayle Lemmon New York Times best-selling author of the Dressmaker of Khair Khana and the author of several Ms. reports on the status of women in Afghanistan. She has reported on improvements for Afghanistan’s women and girls in areas such as education, maternal health and jobs, but says that justice lags behind. She highlights the need for an international commitment to Afghan women:

If the international community continues to invest in Afghanistan and that includes women, then that’s a very good thing. [But] the world is trying to get out of Afghanistan and I think they are trying to downsize their ambitions for it. They have decided on a path of: “Let’s do what we can while we are still there and then, well, we’ll see what happens. That is not a path to stability.”

So where does that leave Afghan women? “My fear is it leaves them out.” Lemmon says.

“Ten years after the world began trying to improve the situation for women here, there should be other options for Gulnaz,” says Knott.

Take action to help Afghan women receive due process by signing the petition below:

Photo of a prison in Farah City, Afghanistan from Flickr user isafmedia under Creative Commons 2.0.