10 Great Albums from 2011 That Happened to be Made by Women - Ms. Magazine
Skip to content 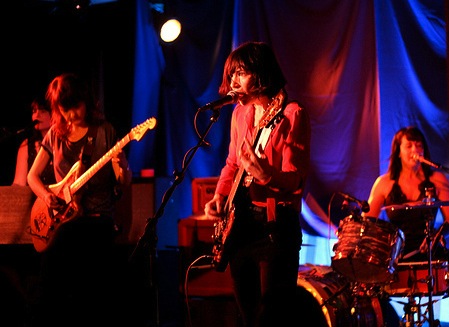 Almost anywhere you looked, 2011 seemed like a banner year for women in music. Remember how exciting it was when the immensely talented Esperanza Spalding pissed off all those Justin Bieber fans and won the Best New Artist Grammy back in February? Remember when Adele went quadruple-platinum and became a pretty badass role model for those among us who are not airbrushed-Ralph-Lauren-model skinny? What about when Nicki Minaj became the first female hip hop artist to top the 3 million mark in digital sales for her monster hit “Super Bass”?

But as this year’s Top 10 lists started to roll out, I saw the same old problems: more lists skewed heavily male than vice versa, and very few publications bold enough to put a female artist in the #1 slot. So I decided to come up with a list of my own.

The following list of 10 great albums put out by female artists and all-female bands is not meant to be definitive or objective: Think of it as a guided stroll through one person’s experience listening to music in 2011. In presenting these albums this way, I don’t want to suggest that they’re similar because they were all made by women; instead, I’d like it to be a testament to the very different and very awesome sounds that women in music are making right now.

Julianna Barwick—The Magic Place. Ambient pioneer Brian Eno once said he strives to make music that “tints the air” around him; Julianna Barwick makes music that tints the soul. Using little more than layered vocal loops and a whole lot of reverb, Barwick’s soundscapes are things of misty and evocative beauty. (Some have gone so far to crown her The New Enya, a title she’s laughed off in interviews.) Like the best ambient compositions or a fresh coat of paint, her music has a way of transforming a room. I spent the summer of 2011 listening to Barwick’s music constantly, but also in a state of transience, moving between friends’ couches, hotel rooms and a half-empty apartment. When I needed to write, or feel grounded, or when everything just started to feel unfamiliar, I unfurled The Magic Place like an old rug. It still has a way of making the place I am, wherever it happens to be, sound like home.

Coasting—You’re Never Going Back. Coasting, the Brooklyn duo of Madison Farmer and current Vivian Girls drummer Fiona Campbell, make largehearted, stomp-and-holler-along indie pop that wouldn’t have sounded out of place on the early 90s K Records roster. I love the gleefully noisy sound of tracks like “Kids” and “Starts and Stays.” You’re Never Going Back has the messy energy of a live performance, with Farmer and Campbell playing off each other as the songs’ dynamism escalates.

EMA—Past Life Martyred Saints. Earlier in the year I wrote about how Erika M. Anderson’s first solo album, Past Life Martyred Saints, sounded like Dante singing along to an early Cat Power record: a personal, private, poetic remaining of Hell. That might sound bleak, but what makes Martyred Saints so compelling is the light that glints through the murk: “Breakfast” begins sounding wounded but builds into some kind of devotional (“You feel just like a priest to me,” Anderson sings; in the background someone musters the strength to clap along), “Butterfly Knife” finds something universal — and even compassionate — in self-destructive impulses (“I’ve been inside your bedroom/I’ve got the same scars, you see”) and the finale “Red Star” rejects the whole heartbreak-as-the-end-of-the-world thing. During the song’s smoldering climax, she’s defiant: “If you don’t love me/Someone will.”

Eleanor Friedberger—Last Summer. This debut solo album from Eleanor Friedberger is a scrapbook of sorts: a lyrical pastiche of the everyday banalities that shaped her experience when she first moved to New York in her early twenties, backed by the kind of retro-tinged piano-pop that a Peanuts character might dance to. I happen to love Friedberger’s other band, the zany, neo-prog duo the Fiery Furnaces, but I recognize their divisiveness; the band’s more experimental impulses can sometimes feel impenetrable and off-putting. So the great surprise of Last Summer is how breezy, inviting and relatable it is. Listening to Last Summer feels like reading a page from Friedberger’s diary, and sometimes (“Watch Footloose with the biggest bottle of vodka in the world”; look me in the eyes and tell me you haven’t been there) your own.

Julia Holter—Tragedy. L.A.-based experimental composer Julia Holter’s first album Tragedy sounds like the lost soundtrack to an old, decaying film. Holter’s said the piece is a reimagining of the myth of Hippolytus, but it’s got a definite Laurie Anderson vibe too (see: “Goddess Eyes”). Tragedy is a compelling listen that unites all sorts of disparate sounds and reference points into something that feels incredibly unique—definitely a rare feat these days. I can’t wait to hear what she comes up with next.

Household—Items. Googling Brooklyn trio Household’s debut album Items is a bit of a pain, but those who wade through the deluge of ironing board advertisements and Febreeze fan testimonials are in for a treat. Clocking in at a taut 18 minutes, Items is a post-punk throwback with some cheeky pop sensibility thrown in for good measure: tracks like “Why Baby” and “Never After” sound like Wire meets the Waitresses. My personal favorite, “Go Away” finds the common ground between the appliances conjured by the band’s namesake and a robotic and passionless relationship: “Defective/Defective!”

Beyonce—4. The working title of my forthcoming memoir is Better Living Through Beyonce. There is a chapter that contains an email, plucked from the inbox of a few of your favorite Canonball contributors, in which I responded to the question “How was your night?” with a link to the video for “Best Thing I Never Had” and maybe a few choice lines quoted in capital letters (“You showed your ass and then I saw the real you” = pure pop poetry). There is an enclosed DVD of me and Ryan Gosling dancing to our wedding song “1+1″ (Hey girl, I don’t know much about guns, but I’ve been shot by you.) There is a full chapter detailing why I left him a few months later, when he demanded that I be all up in the kitchen in my heels (annulment time). There is a ten-page reverie about how much I love the part in “I Care” when she gets all Artist Formerly Known as Beyonce and sings along with the guitar solo. What we are talking about here is a woman with a voice powerful enough to make me reevaluate my stance on the song “Sex on Fire.” Disrespect her? No you won’t.

Laura Marling—A Creature I Don’t Know. British folk singer Laura Marling’s voice gets under my skin. It’s got this world-weariness that always makes me gasp a little bit when I remember that she was born the same year as my little sister (1990!); she sounds so much wiser than me. A Creature I Don’t Know is her third album; the songs sound like shanties and they move like the sea: crashing fury in some moments (“The Beast”) that lurch into peaceful calm (“All My Rage”). She’s got Joni Mitchell’s nimble fingers on the single “Sophia,” easily one of my favorite songs of the year.

tUnE-yArDs—w h o k i l l. “I haven’t tried to find a compromise between myself and others,” the filmmaker Chantal Akerman once said in an interview. “I have thought that the more particular I am, the more I address the general.” I kept coming back to this quote while listening to w h o k i l l, multi-instrumentalist Merrill Garbus’s eccentric and masterful second album. w h o k i l l is a pointed examination of self (Garbus’s undauntedly intimate lyrics focus on sex, violence, politics, and body image), but the chords it strikes are universal. With its gaze fixed on social divisions and economic inequality, w h o k i l l seemed by year’s end like one of pop music’s only honest statements on what it felt like to be an American in 2011. My favorite record of the year by a mile.

Wild Flag—Wild Flag. “I felt like I was standing beneath an airplane right after take-off,” I wrote the night I saw Wild Flag live for the first time in April 2011–back before the release of their debut album. Everyone left their early performances wondering whether they’d be able to replicate the turbine whoosh of their live show on a record, but somehow, they found a way. Wild Flag is more than just the best rock record of the year, it’s a document of music as a life force. “We sing to free ourselves from the room,” they proclaim on “Romance,” while former Sleater-Kinney guitarist Carrie Brownstein documents her enduring urge to rock out on “Future Crimes:” “I can’t turn it down/Or make it quiet.” Though Brownstein, Rebecca Cole, Mary Timony, and Janet Weiss could easily rest on the stellar reputation of their previous bands, their first record together was a testament to the power of punk rock in the present tense. Of so many great, inspiring and all too rare things, Wild Flag are living proof.