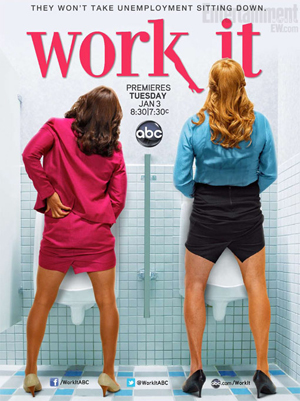 If you’ve watched ABC lately, you have probably been bombarded with ads for its new, critically-derided comedy, Work It, in which two unemployed men cross-dress in order to obtain jobs as female sales representatives. The plot is as well-worn as it is far-fetched. Men being forced by circumstances to appear as women has long been a common plot device in U.S. film and television, ranging from the widely popular Some Like It Hot and Tootsie (voted the two funniest U.S. movies of all time by the American Film Institute) to lesser fare like Bosom Buddies and Sorority Boys. As with these works, much of Work It‘s “humor “derives from the fact that these two “men in dresses “are somehow able to convince their coworkers that they are women.

But to transgender women, these images are no laughing matter. Their femaleness is no masquerade, yet they often experience discrimination for not being able or not desiring to “pass “as women. Trans men, who are typically less distinguishable from other men, likewise are frequently subjected to discrimination if their transgender histories are known. Individuals who do not identify as either women or men face even greater obstacles.

Our book, The Lives of Transgender People, confirms that gender nonconforming individuals experience widespread discrimination. In surveying close to 3,500 transgender people, we found that more than a fourth of the respondents and a third of the transgender respondents of color had experienced subtle or overt harassment in the previous year. In addition, nearly a fifth of the participants had been denied employment or advancement because of their gender identity or expression. The participants who were widely known to be transgender had the greatest difficulties; more than a third indicated that they experienced ongoing employment discrimination.

Common was the experience of Lynn, a 35-year-old transsexual female interviewee. She was fired from two jobs when she told her supervisors that she would be transitioning from male to female, and she has not been able to find work since then. Because she is unemployed, Lynn does not have health insurance and can no longer afford hormones. She faces an impossible dilemma: she encounters anti-transgender discrimination because she does not look like other women, but without a job she cannot afford to alter her body to look more traditionally female. Robert, a 51-year-old trans man, chose to take his chances finding other work, stating: “I walked out on the job I had when I was diagnosed because [my supervisors] would not let me transition at work and I would not put up with one more day of trying to pretend to be female. ”

The discrimination Lynn and Robert experienced remains completely legal. There is no federal law protecting transgender workers, and only 16 states and the District of Columbia ban employment discrimination against individuals because of their gender identity or expression. Absent government action, most employers have failed to take the initiative themselves. Although a growing number of businesses and educational institutions are recognizing the importance of this issue, they remain the minority. Only about one-third of Fortune 1000 companies and, appallingly, just one-tenth of colleges and universities currently have trans-inclusive nondiscrimination policies.

Work It makes a mockery of transgender experiences. It portrays “men in dresses “(a common caricature of transgender people) as comically absurd, while, at the same time, depicting a world in which the difference between one’s gender presentation and gender at birth is a non-issue. If only it were that easy for individuals assigned male at birth to be accepted as they see themselves: as women.

Reprinted with permission from AlterNet.

About Genny Beemyn and Sue Rankin