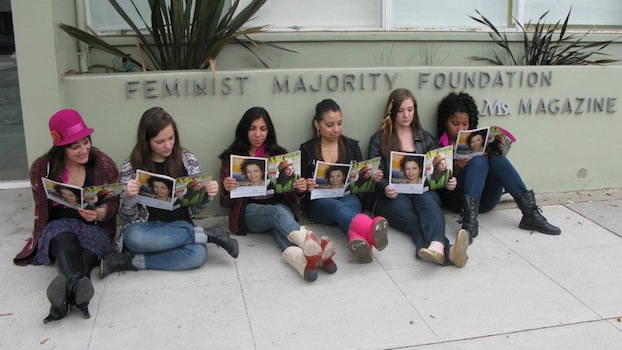 A couple of weeks ago, the staff of Ms. magazine and the Feminist Majority Foundation were treated to a live, in-office performance by five members of New York’s Project Girl Performance Collective.

They had us at “Girl Power.”

That was the title of their opening song, which told the story of the women’s movement from the suffragists to the present day. Unabashed enthusiasm, combined with serious research, is characteristic of the work of the Collective. Their willingness to tackle complicated material makes their earnestness all the more impressive. In a half-hour performance of material written entirely by the Girls–including skits, spoken word, song and dance–the Collective brought their audience face-to-face with the issues that young women face everyday: body image, sexuality, how to compete in sports,  even the lack of good roles for women in the performing arts. Their full-length performances also take on rape in the Congo and human trafficking. 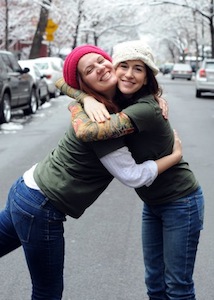 Started by Ashley Marinaccio and run by Marinaccio and her partner, Executive Director and Producer Jessica Greer Morris, Project Girl Performance Collective is on an urgent mission to empower girls and raise the status of women by creating a safe space for girls to write and perform their own work. The group currently has 90 members who, through workshops and performances, learn to create positive change in their communities and their own lives. They perform in theaters, colleges, high schools and middle schools around the country. When the group left our office, they were on their way to a United Nations Foundation event to perform a cutting-edge show about forced child marriage in the Ethiopia, Liberia Guatemala and Malawi event. They have even performed at the White House.

A talk-back after the performance gave an eager audience of feminists the chance to thank the Girls for breaking up our work day with a glimpse of something that reminded us of why we do what we do. Deanna (18), Karen (20), Dominique (20), Emily (22) and Monica (16) spoke articulately about the goals of their Collective and what it has meant to them. The answers they gave when we asked what they meant when they used the word “empowerment” (which they did often and emphatically) provide a glimpse into their maturity and devotion to the cause:

Karen: What’s empowerment? It’s finding something deep down inside yourself that makes you want to wake up.

Deanna: Empowerment is being inspired and inspiring others.

Emily: Empowerment is also a movement. We spark something–we ignite it–and it runs through us to you and you pass it on.

Although feminism is implicit in everything the Girls do, they don’t always use the word (don’t worry–the Ms./FMF staff did some schooling!) But we couldn’t help but enjoy Monica’s answer to the question, “Do you call yourselves feminists?”

I call myself a Shero.

Read more about them, sign your daughter up for an audition, give to their cause or book them for a performance now. They will ignite your spirit, and you will want to pass it on.