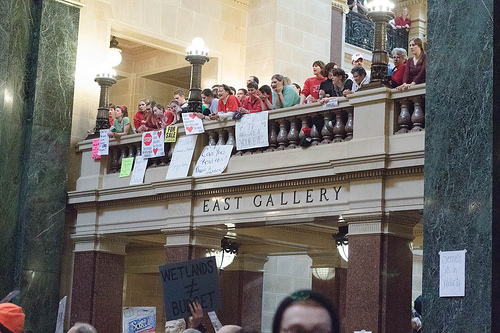 When I was younger, I asked my mom why she decided to become a teacher. Aside from the obvious factors–she liked working with kids, she wanted to help students learn, she had a passion for teaching–she also said that in her day there were more or less two professional options for college-educated women: nurse or teacher. My mother became a dedicated and inspiring teacher, and she raised me to believe that my own professional options were legion. Because the proverbial apple doesn’t fall very far from the tree, I chose teaching.

My husband also chose a career in teaching. When people ask us what we do, I answer that I am a high school English teacher and they say, “Oh, how nice.” He, too, answers that he is an English teacher, and they say, “Oh, bless your heart!” The difference in those responses is subtle but significant. My choice is seen as unremarkable because the teaching profession is traditionally dominated by women; a 2007-2008 study found that 76 percent of public school teachers were women. My husband’s choice, however, is a noble one.

Perhaps the association between women and teaching is one reason conservative politicians seem to see teachers as easy targets. Last year, Wisconsin’s Governor Walker made headlines by stripping teachers of their collective bargaining rights and cutting their pay and benefits. He wasn’t the only one; governments in Florida, Idaho, Illinois, Indiana, Michigan, Nebraska, Ohio and Tennessee tried to pass similar legislation in 2011. Many states are already in the process of crafting reform to reduce the power of teacher tenure, making it easier to terminate teacher contracts.

Perhaps these politicians are emboldened by the belief that women won’t fight back.

If so, they’re sorely mistaken. As evidenced by the protests in Wisconsin’s state capitol, we teachers are indeed fighting back. And after a dogged teachers’ union campaign, in November, Ohio voters defeated a measure that would have limited teachers’ collective bargaining rights on important issues such as class size and health care.

However, more anti-teacher bills are coming down the pipeline in 2012, and none of these actions by politicians accords teachers the respect we deserve. Teachers are often classed with nurturers and caregivers; thus people assume that anyone who is a “natural” caregiver–i.e., women–can and will do the job with little training or incentive. In truth, teachers are rigorously trained professionals, and that was as true when my mother graduated college as it is today. Not only do educators go through as much training as other professionals before they’re allowed to enter the classroom, but they also are required to continue professional development while they are employed. Teachers must gain mastery of the content they teach; they must also learn to reach resistant, troubled, struggling and otherwise “left behind” students.

I have personally seen the challenges of implementing the requirements of No Child Left Behind and, more recently, the Common Core standards. While I believe in the spirit behind these initiatives–I certainly don’t want any of my students to be left behind–it has taken every skill I have learned in all of my teacher training to be able to implement them successfully for every student at every level. Fortunately, I am trained to do so–and it is my training that makes me successful, not an inherent ability to nurture.

In addition to requiring training, teaching is grueling work. Teachers are expected to be at school before the first bell rings, work for eight hours, and stay after the final bell rings–plus bring any extra grading or planning home. That often adds up to 60+ hours a week. There’s no coming to work late or leaving a few minutes early when 30 pairs of eyes are staring up at you, depending on you for knowledge critical to their success in life.

Of course, teachers nurture and care for students within the walls of their classrooms, but they also have training in how to educate–training that most politicians creating education policy lack. And tespite being trained as extensively as other professionals, teachers only earn a fraction of the respect. When society starts to see teachers as professionals rather than glorified babysitters, education policy may begin to take a different turn. Until then, we’ll fight.

Ashley Lauren Samsa is a 27-year-old high school English teacher in the suburbs of Chicago, IL. Aside from teaching full time, she currently writes for her own site, Small Strokes, about the intersection of feminism with her personal and professional life, and is a Senior Editor for Gender Across Borders, where she writes about many global feminist issues.