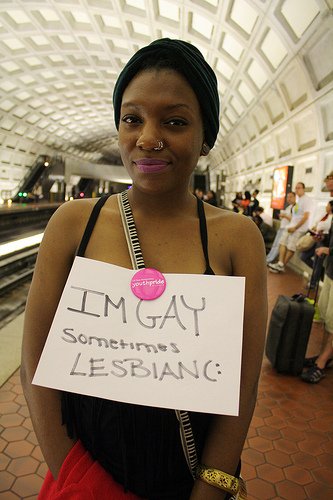 In the words of the venerable ’90s hip-hop sensation Salt-N-Pepa: “Let’s talk about sex, baby. Let’s talk about you and me.” Okay, take a minute. Now that you’ve stopped singing, let’s get serious for a second.

While yesterday’s post dealt with the negative sexualization of women and girls, it’s equally important to encourage a positive outlook on sex.  In fact, the potentially self-esteem-ruining and otherwise problematic objectification of women and girls in media culture means that supporting healthy sexuality has become an even more pressing feminist goal organizations.

There a lot of large, national organizations that provide contraception, advice and sexual-health advocacy for women and men, but most of these organizations are well-known and cover a pretty broad spectrum. I want to feature several organizations with more focused missions that serve often underrepresented populations, particularly women of color and youth.

As a national organization with many regional and grassroots branches, the SisterSong Women of Color Justice Collective supports ambitious and vibrant programming that addresses sexual health, reproductive rights and public policy, focusing their advocacy and services around the African American, Middle Eastern, Asian American, Native American/Indigenous and Latina communities.  Emphasizing the importance of collective action and support, SisterSong also offers reproductive justice training for individuals and groups that gives people the tools to enact change in their own communities. SisterSong shines a unique spotlight on reproductive rights issues for women of color, writes Zakiya Luna, “mov[ing] beyond the narrower focus on civil and political rights … to emphasize other aspects of human rights when organizing for women’s sexual and reproductive rights.”

The National Latina Institute for Reproductive Health (NLIRH) supports a similarly impressive spectrum of programming, advocating for everything from immigrant rights to contraceptive equity to LGBT rights within the Latina community. Recognizing that many Latinas and immigrants, have “very limited access to the institutions and officials responsible for setting and implementing polices that directly affect [their] lives,” NLIRH’s mission emphasizes that, in order to best serve the Latina population, they “must locate reproductive health and rights issues within a broader social justice framework that seeks to bring an end to poverty and discrimination and affirms human dignity and the right to self-determination.”  Like SisterSong, NLIRH stresses that sexual health advocacy for women of color doesn’t just stop with handing out contraception; it requires support, education and advocacy, with the ultimate aim to better the lives of Latinas within and outside of their communities.

Last but not least, the Native Youth Sexual Health Network (NYSHN) focuses on the needs of Native American and indigenous youth in the U.S. and Canada, with programming and resources that encourage teens and young adults to advocate for their own sexual health and needs by promoting sex positivity within indigenous cultures. It helps design comprehensive sex ed programs, supports reproductive justice initiatives and collaborates with many other organizations. One recent NYSHN initiative, the Native Youth Photography Project, sought to combat homophobia and transphobia within First Nation communities in Canada; the end result was a series of  beautiful black-and-white photographs of lesbian, gay and transgender youth proclaiming solidarity and pride for their “two spirits” identities.

Sexual health advocacy isn’t one-size-fits-all. Yes, feminism is a movement for everyone, but it’s still important to remember that many of us may have specific or different needs, in some cases precisely because of the ways women and youth of color are marginalized by mainstream culture.  Supporting women within our communities and recognizing our individual and cultural richness–that’s the future of feminism.

Part Ten in a Women’s History Month series celebrating organizations and ideas that represent the future of feminism.