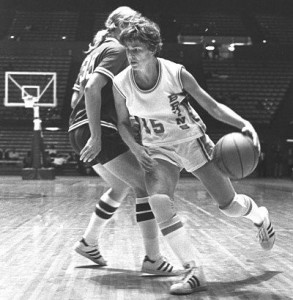 When the 30th annual installment of the NCAA Division I Women’s Basketball Championship tips off Saturday, fans will be glued to the screen, wondering if anyone can stop undefeated Baylor and player of the year Brittney Griner.

The athletes on the 64 teams in the tournament stand on the shoulders of generations of women who played the game before them. Here’s a starting line-up of basketball trailblazers: seven women, five players and two coaches, who paved the way for the competition and benefits college players now enjoy.

Carol Blazejowski: When Naismith Hall of Famer Carol “Blaze” Blazejowski was in high school, she spearheaded an effort to form her school’s first girls’ varsity team and then led that squad to the New Jersey state championship game in 1974. The sharpshooter went on to be a three-time All-American at Montclair State, competed in the AIAW Final Four in 1978, played professionally in the short-lived Women’s Professional Basketball League and was a member of the U.S. team that boycotted the Olympics in 1980. Although professional basketball wasn’t a long-term option for Blaze, she has dedicated her professional life to giving other women athletes that opportunity, first as director of basketball development for the WNBA and later as president and general manager of the WNBA’s New York Liberty, an experience about which she says: “[Y]ou always want to make it better for the next generation.” Her next job: She’s returning to Montclair State as vice president for university advancement.

Lusia Harris: Between 1975 and 1977, Lusia Harris won three consecutive AIAW college basketball championships at Delta State University, where she was the only African American player on the team and one of few African American students at the mostly white Mississippi school. Harris went on to win a silver medal in the 1976 Olympics and was the first and only woman ever officially drafted by the NBA, a distinction which Harris calls both “a publicity stunt” and “a big honor.” Widely considered to be the prototype for the modern center, she was one of the first two women and the first African American woman inducted into the Naismith Hall of Fame. Despite her prowess on the court, Harris paid for her college education through a combination of academic scholarships and work-study programs because her university didn’t yet offer athletic scholarships for women.

Ann Meyers: Meyers was an early beneficiary of Title IX legislation, as she was the first woman to be offered a full four-year athletic scholarship to UCLA. She became a four-time All-American there, led the team to the AIAW national title in 1978, was on the 1976 Olympic team and in September 1979 became the first woman signed by an NBA team when she inked a contract with the Indiana Pacers. Although she was soon cut by the male pros, Meyers became the first player drafted by the Women’s Professional Basketball League and went on to become a television sportscaster at a time when the field was dominated by men. Now the president and general manager of the Phoenix Mercury, Meyers uses her basketball knowledge and business savvy to champion women’s sports and help shepherd a new generation of women athletes.

Violet Palmer: A star point guard and two-time Division II NCAA champion at Cal-Poly Pomona, Palmer became even better known as a basketball referee after she graduated in 1987. After years of officiating college and WNBA games and NBA exhibitions, she became the first woman to referee an NBA game in 1997. Also the first woman to officiate at the top tier of any major U.S. men’s professional team sport, Palmer broke a glass ceiling–and irritated some NBA players, who questioned a woman’s ability to referee the men’s game. But Palmer was ready to prove them wrong. She recalls, “I said, ‘… This I am going to do … I’m going to work my butt off. I’m going to be just as good as every single man here.’” Now a veteran in the league, Palmer broke another barrier in 2006 when she became the first woman to achieve the highest honor for an NBA ref: chosen to officiate a playoff game.

Pat Summitt: An All-American in the days before athletic scholarships, Pat Summitt (then Pat Head) went on to captain the 1976 women’s Olympic basketball team. She started coaching at the University of Tennessee when she was only 22, even driving the team van to away games. She went on to become the “winningest coach” in NCAA basketball history. And she’s made sure that her players leave her team with something more important than a mean crossover dribble: Every athlete who has completed her eligibility at Tennessee during Summitt’s tenure has graduated or is in the process of doing so. She’s also an outspoken advocate for women’s athletics: “There are a number of institutions that have struggled to make a commitment to marketing their women’s programs. You have to spend money to make money … That’s not happening as much as it should. Coaches have to understand that that’s very, very important.” Summitt has also given inspiration for continuing to coach despite being diagnosed with early-onset Alzheimer’s disease.

Sanya Tyler: Tyler became Howard University’s first full-time women’s basketball coach in 1980 and led the Bisons to conference championships and a berth in the NCAA tournament. But when Howard hired a man without any head coaching experience to lead their men’s program and paid him more than they paid Tyler, she filed a Title IX suit against the university and won. Her case not only marked the first time a jury awarded monetary damages to a plaintiff in a Title IX case, but it also ushered in a series of Title IX suits by women’s college coaches and programs. According to Tyler, “Athletic directors started to get a better perspective of what should be done for the women. … Many [women’s] coaches began to receive comparable salaries to the men. When the jury awarded $2.4 million, that sent a serious message that Title IX is a law, not a recommendation, and it should be adhered to.”

Sue Wicks: Three-time All-American at Rutgers and 1988 Naismith Player of the Year, Wicks played overseas for years before signing with the New York Liberty in 1997, the WNBA’s inaugural season. A perennial All-Star beloved by fans and her fellow athletes (she won the league’s sportsmanship award in 2001), she helped bring the WNBA into the mainstream, noting, “It was more than just for the girls. … I always thought of us as playing for the young boys, that you wanted to win their minds.” In May 2002, Wicks became the first active WNBA player to come out as lesbian (three years earlier, her GM, Blazejowski, was casually described in the team’s media guide as living with a woman partner and their two children). Wicks encouraged the league to celebrate its lesbian players: “I think it’s great when they say, ‘Here’s a player and her husband and baby.’ But I’d love to see a couple of [lesbian] women profiled, too, especially if they had a great, solid relationship, just to show that in a positive light.”

While there is still plenty of trail left to blaze 40 years after Title IX passed into law, women college athletes have never enjoyed more resources or better benefits than they do today, thanks to the sacrifices made by the women who played the game before them. The athletes who will lace up their sneakers today and over the next couple of weeks to compete for a coveted national championship will play nationally televised games in front of large crowds, their college degrees fully subsidized. Some will go on to play professionally in the WNBA and abroad; a few may earn lucrative endorsement contracts.

And hopefully many of them will carry on the legacy of these pioneering women athletes who have left some mighty big high tops to fill.

Photo of Ann Meyers circa 1978 courtesy of UCLA Athletics.