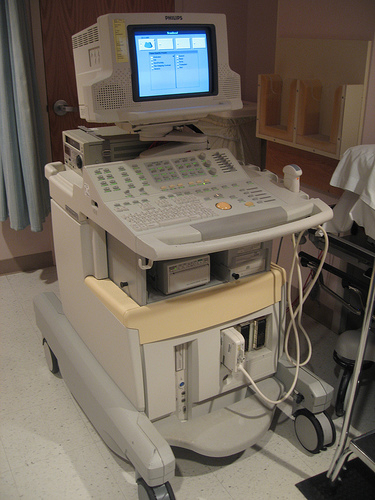 Across the United States, anti-choice bills are rising like a tide of vitriolic chauvinism, threatening to sweep away a woman’s right to choose–and take legitimate reproductive medicine down with them.

State legislatures have been mandating a litany of medical hoops that women seeking abortions must jump through, among them ultrasounds. According to the Guttmacher Institute, seven states mandate that an ultrasound be performed before an abortion and that the woman be offered an opportunity to view the image. This number is only expected to grow. Virginia recently passed its own version of the mandate, as did the Idaho Senate. Idaho House members are expected to agree, but first those legislators will be invited to view a live ultrasound–though it is not yet clear whether it will be abdominal or vaginal. To make matters worse, the Idaho bill requires two ultrasounds: one from a crisis pregnancy center–an anti-abortion facility that masquerades as a reproductive health center–and another from the clinic that will actually perform the abortion.

One fact has been lost in the uproar about state-mandated transvaginal probes, though: Ultrasounds for women seeking abortions are not unusual.

When I worked at Planned Parenthood, counseling women about abortion, a vaginal ultrasound was often used prior to the procedure. It can give a much clearer picture of certain pregnancies, especially early ones (when the vast majority of abortions occur). I have even administered those ultrasounds. They typically do not take very long and are described as somewhat uncomfortable, but not painful.

Still, no woman wants to have one if it’s not necessary.

When we explained to our patients that we were going to perform an ultrasound in order to confirm the pregnancy, they listened and usually agreed. We would perform an abdominal ultrasound first, and then if we could not get the right picture we would tell the patients that a vaginal ultrasound was needed. The woman was part of the decision. We always made sure to inform our patients about what would happen and what to expect at all stages of the process.

This full disclosure and counseling is what anti-choice activists claim does not happen. Clearly, they are the ones who are uninformed. The decision to have an ultrasound is one for doctors to make along with their patients; the government should have nothing to do with it. State-mandated ultrasounds are designed solely to make a woman’s quest for an abortion more difficult. Such legislation not only creates a chilling effect on women, but tarnishes an accepted and routinely used method of examination.

Proponents of these bills claim that they give women more information and time to think about their decision. This assumes that women are currently making this decision on a whim, which is hardly the case. I counseled more than a thousand women as a clinic assistant, so I can say from experience that women know what they are doing.

When your doctor determines, upon evaluation of your body, that a vaginal ultrasound is necessary, that is an informed medical judgment. Furthermore, as a patient, you should have a voice as well. But when the government determines that you need to have a certain type of ultrasound, simply because you want an abortion, that is state-sponsored rape.

Photo of ultrasound machine by Flickr user redjar under license from Creative Commons 2.0